On Friday, the SPX gapped up and pulled back to Phil D Gap.

On Monday, the index spiked to an opening high and spent the rest of the session in a Slim Jim — flat-lining.

My interpretation is Friday was an A wave down, with Monday’s opening spike a B wave.

Given the overnight action as I write Monday evening, it looks like a C wave decline has begun.

The alternative is, as W D Gann would call it, 2 days on the side… of distribution.

An hourly SPX shows a flat market since Friday morning.

IF Friday’s gap is offset on trade below the 4680 region and price is sustained below that level, then there a strong likelihood that, at the very least, a correction to the September high of 4545 is on deck.

That ties to the rising 20 day moving average currently residing at 4555.

A drop to the 20 day moving average on the heels of the parabolic rally since early October should act as support.

Note that this parabolic advance began when the SPX knifed back above its declining 20 day ma on October 14.

So we have our pivot defined… the 20 day moving average, which ties to the prior swing high on September 2.

The presumption is IF the SPX drops to the 4550 region, it will perpetuate a return rally into year end.

However, breakage below the September high is a blaring siren.

As well, the correlation between SPX and VIX has had an outstanding record nailing tops — especially when it runs up to .50 or better and then drops off sharply and suddenly — as it has in the last two weeks. 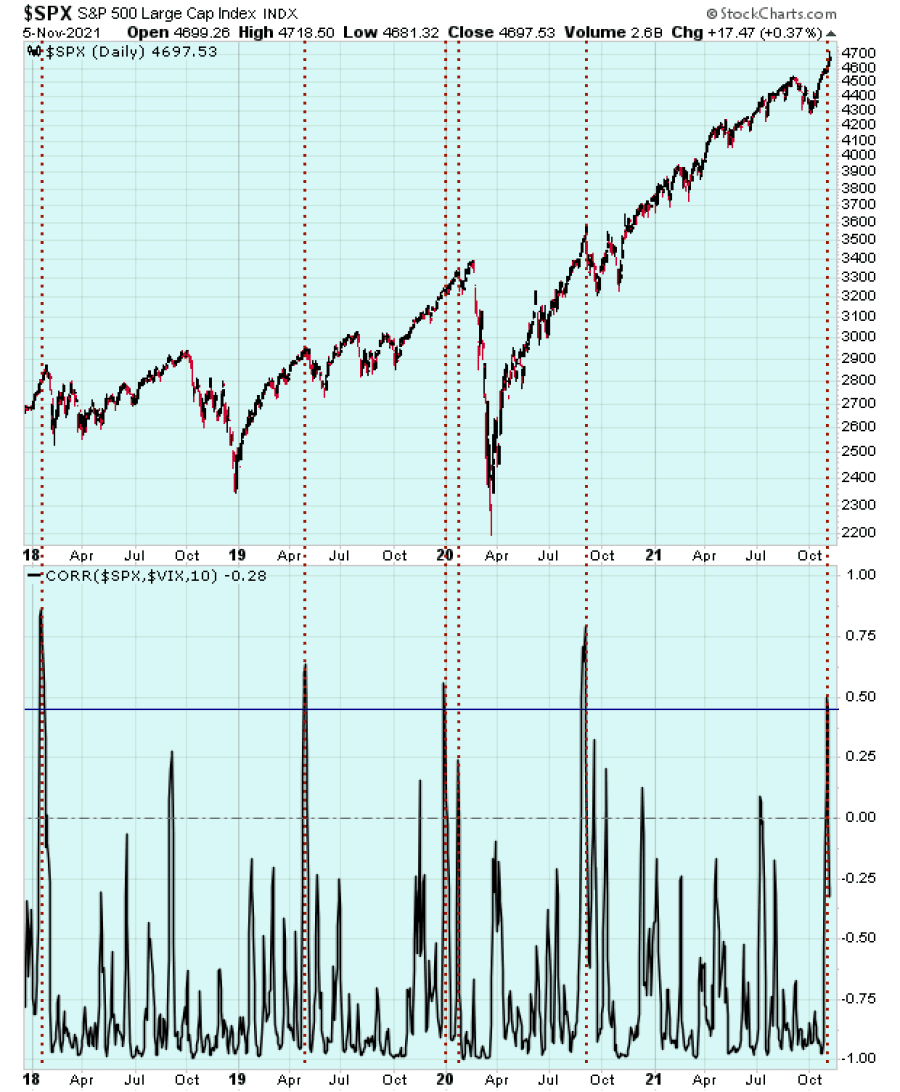 To wit, VIX is surging not on a decline in the SPX, but at STH’s.

Additionally, Monday was the 8th consecutive SPX advance… a top indication that only occurs roughly once per decade.

5 of the previous 11 days into Monday’s all time closing high occurred on negative breadth — also a once in a decade warning.

The SPX has struck a new all time high the first 6 trading days of November.

This is the longest all time high streak to start any month since the 6 in January 2018.

The reversion to the mean from that top was a doozy.

Finally, the SOX has been on fire led by Tractor Beams AMD, NVDA and XLNX.

SOX is green 8 straight days. The last time it had a streak like this was late January 2018.

The reversion to the mean from that spike was a doozy.

Previous Post Trading Tesla: 7 Lessons from an Epic Bear Smash Next Post Options In Play – Home On The Range