My dad was a great tape reader. He knew nothing about technical analysis. He didn’t know how to read charts — but he knew how to read people.

When I joined his trading operation after leaving the famous Drexel Burnham operation in Beverly Hills, he would drill into me, “Stocks don’t move, they are moved.”

Underpinning my dad’s insight, the greatest warrior ever, Sun Tzu wrote, “Thus the expert in battle moves the enemy, and is not moved by him.”

In my experience, the first hour and the last hour are typically when those who move stocks reveal their intentions.

Many traders think trading is always about being active during the day.

However, the best trades are often in the waiting, in doing nothing.

As Tom Petty sang, “the waiting is the hardest part.”

Allow me to explain. “Doing nothing” actually translates into watching.

As I like to say, speculation is observation, pure and experiential. Thinking isn’t necessary and often just gets in the way.

While as traders we’re all transactional by nature and enjoy the immediacy of speculation, we must be mindful not to confuse immediacy with immediate gratification.

Some of my best trades have come from doing nothing, stalking a stock and pinpointing an entry early in the session or late in the session — letting other players fight it out in the noise of the battle.

Stocks have a tendency to make first hour lows or highs.

Likewise, Late Day Break Outs (LDBO) — of the days range — either up or down, usually (not always) see continuation into the bell.

Tuesday on the Hit & Run Private Twitter Feed I posted the following tweet regarding APPS and MGNI.

These are two of my favorite momentum names at the moment and I am always stalking them.

In the markets it’s critical to have a core Watch List of stocks that you decide to have on your radar.

These are names culled from my Hit List of strongly uptrending and downtrending stocks that are sent to subscribers over the weekend.

It’s vital to track a select group of stocks for two reasons:

1) The more you try to see, the less you see. You cannot possibly watch the behavior of more than 6 to 10 stocks when the market is the most frenetic… in the first and last hour. This is when reversals and extensions are most likely to occur.

APPS and MGNI are names on the current Hit & Run radar.

The above tweet after Tuesday’s open defines two things subscribers were watching for:

1) An Opening Range Breakout (ORB). This is a breakage above or below the first half hour's range.

2) A Jump the Creek signal. This occurs when a stock offsets an opening gap.

Of course, all trading is contextual. An Opening Range Breakout occurs within the context of a stock's position on its dailies.

On Tuesday morning, APPS was not immune to the air pocket in techs.

The following daily APPS shows it gapped down, filling an open gap from February 4.

Stocks in strong uptrends, such as APPS, have a tendency to make first hour lows.

Notice that APPS' first hour low and Gapfill on Tuesday occurred ABOVE its rising 50 day line.

The stock is in a strong position.

If the bounce was genuine, the first pullback should see buyers step up.

The first pullback in APPS probed the Opening Range Breakout and APPS turned up.

The Money Trade occurred when APPS cleared the morning high in tandem with offsetting the morning down gap. This is what I refer to as a Jump the Creek buy signal. It is just as viable on the short side.

The Jump the Creek signal triggered a Late Day Breakout, which telegraphed momentum into the bell.

In sum, strongly trending names that turn green on the day and offset an open down gap are good candidates for sprints into the bell… AND good carry over long (Overnighter) candidates.

While MGNI did not trigger a Jump the Creek buy signal on Tuesday, it did rebound from an open gap on its dailies, mirroring the dailies on APPS.

Hence, MGNI was an audible long on the Hit & Run Private Twitter feed with members taking it at 49.80.

We sold half at 52 and carried over half. This morning, MGNI is trading at 55.75 pre-market.

PINS is another example of a strongly trending stock with a late day Jump the Creek buy signal on Tuesday.

The 15 minute PINS below from Tuesday shows it offset the morning down gap at 80.65, exploding to 84.90 in the last hour and a half. 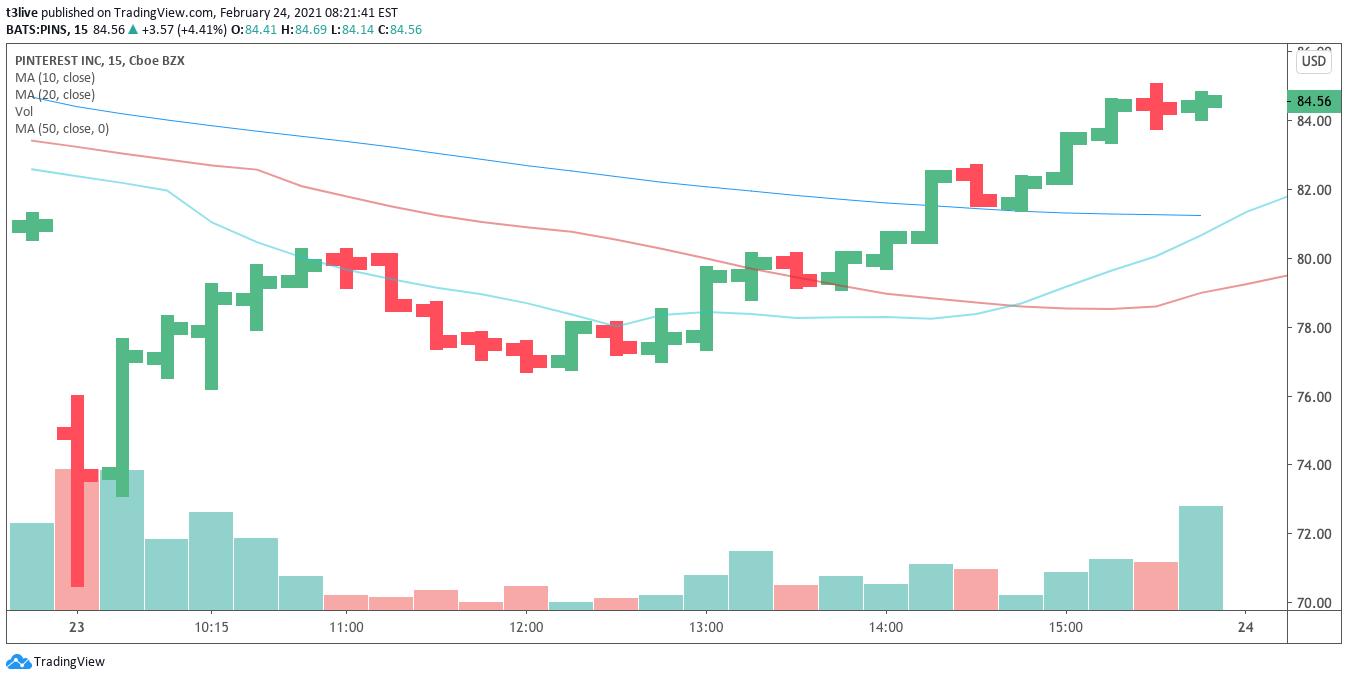 YALA is a recent Hot IPO that satisfied a Combo setup late Tuesday.

YALA had pulled back from last week's high of 42 to 21 Tuesday morning. In the process, it tested/undercut its 50 day moving average for the first time… satisfying a 50% pullback at the same time.

YALA triggered an Opening Range Breakout early in Tuesday’s session, tracing out a Slim Jim (flat line) intraday prior to a Jump the Creek buy signal.

I tweeted to take it long in the last hour on a swing/Overnighter. Members got filled at 26.23.

This morning, YALA is trading at 27.80 pre-market. 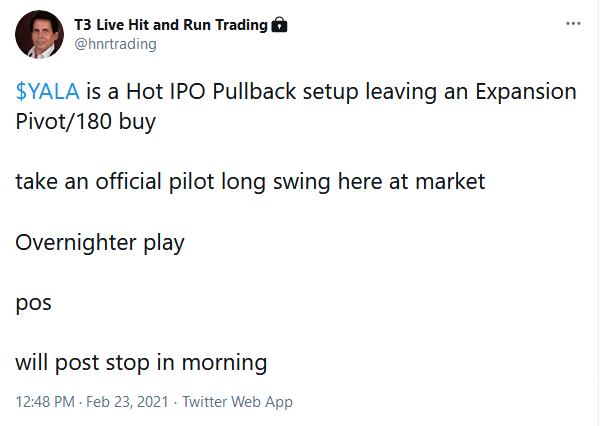 Tuesday’s last hour revealed the agenda for this morning’s up gaps in APPS, MGNI and YALA.