FANG On the Hill

“Well on the way

Head in a cloud

The man of a thousand voices

Talking perfectly loud.” – The Fool on the Hill, The Beatles

It is the culmination of a bipartisan investigation over the past year on the effect of these tech giants’ market dominance.

In late 1999, a federal judge said MSFT had established a monopoly.

Its stock price shrugged it off initially blowing off into the end of the year, but it topped on at the end of 1999 ahead of the March 24 top in the SPX that year.

As well this week AAPL, FB, AMZN and GOOGL all report.

NFLX missed on July 16. MSFT dropped after reporting on July 22.

QQQ at large has also been infected, showing its first two consecutive lower weekly lows since the week of June 16.

This is my Weekly Plus One/Minus Two buy setup.

It occurs when the 3 Week Chart is pointing up and then you get 2 consecutive lower weekly lows.

There is a big difference between the setup in mid-June and the current setup.

When the Q’s went into the weekly Plus One/Minus Two buy position in mid-June they reversed immediately to the upside whereas last week the Q’s closed near the low of the week.

Earnings and vaccine anticipation have been holding the market up along with the Passive ETF Trade backstopped by the Fed.

Interestingly, arguably, the pin that popped the bubble in March 2000 was a joint statement by Bill Clinton and Tony Blair supporting free access to the human genome versus the right to patents.

I can’t help but wonder if there is another political knife being held at tech’s throat today.

As well, the market exploding when Y2K proved to be a non-event times with the explosion of the market on hopes that the coronavirus would be contained sooner rather than later.

Despite news to the contrary, the market has marched higher — that is until mid-July.

It must be said that despite the progress being reported, many of the vaccine companies such as BNTX and MRNA folded like cheap suits last week.

Those are some ugly weekly bars these two names put in last week.

So in addition, this week’s soap box derby de-FANG hearings on the Hill, the drama intensifies with another underpinning of speculative sentiment, biotech, losing its luster.

The tension is on the tape.

The following chart shows the performance of FANG versus the S&P 500. 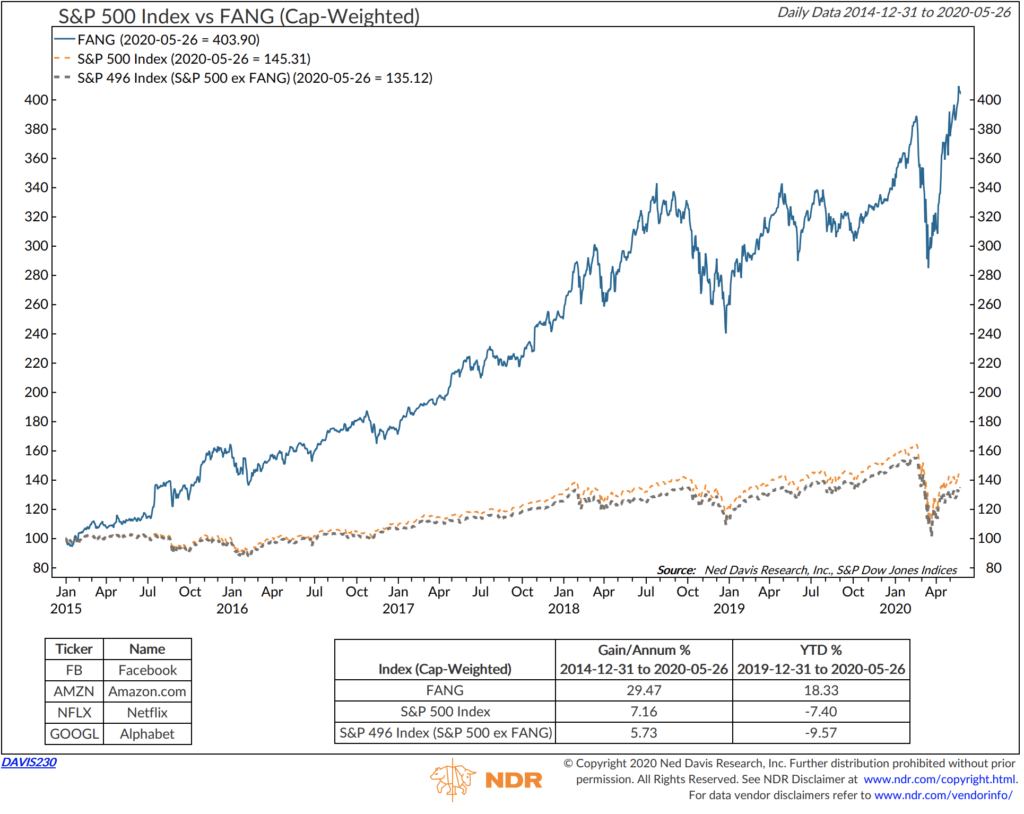 Is it possible the market could have another blow-off? Yes, but the structure up from the March low shows 5 completed upwaves for this phase of the advance at least.

We could get an extension, but the news breaks with the cycles and my cycle work looks set to exert their downside influence.

When the crowd piles into a few “one-decision” stocks, such as was the case with the Four Horsemen MSFT, INTC, CSCO and DELL in 2000 and the Nifty Fifty in the early 1970s, one way or the other, the market has a hill of unrealized gains that sooner or later will be a target.