Throughout the past week, I have stated there are a lot of things suggesting that the market should see a correction.

Yet the SPX has made higher highs for 5 consecutive sessions without trading below a prior day's low.

This is a “stretch." The only comparable run this year was the 6-day run of higher highs-- without trade below a prior day's low—

The following day saw the dailies turn down and then the index saw another stretch into an important peak on March 29th at 4637.

The run into late March saw the SPX clear its 200-day moving average.

There is a distinction with the current run-- the 200 day is now sloping down.

Given the runaway nature of the rally since the July 14th Trap Door flagged in this space, the presumption is a correction should play out and then a test of the highs.

That pattern is not required but it would be the normal expectation.

The question is whether a correction is sharp or shallow.

If it’s sharp it should find support at/above the 4150 region.

As well given that the 200-day moving average is declining, the normal expectation is that the SPX should be rejected the first time up…the first time attacking this downsloping widely watched market barometer.

By the same token remember that the Hail Mary Boyz…the money managers and hedgies who are trying to save their year and pull a rabbit out of the hat probably have a playbook to jam the 200-day moving average forcing their long positions higher.

The SPX seems ripe for a picture-perfect pullback from multiple resistance at the 200 day, and a declining tops line.

But, this is probably too pat for a big top. 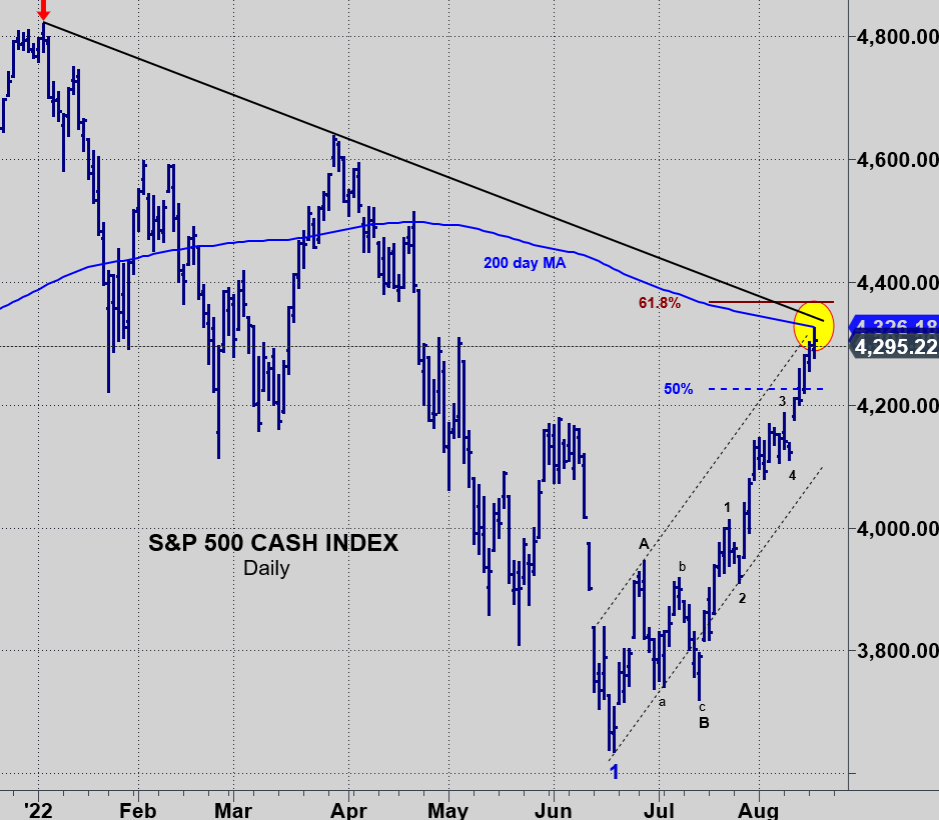 A sharp pullback could be magnetized to the 50% retrace around 4225, pulling the rubber band back, squeezing above the 200 day and the declining tops line.

A pullback would attract beaucoup shorts and clear some of the froth allowing a jam job north of the 200 day.

In any event, pullback or not, the market may have a date with destiny in early September.

Two weeks ago, when I noted the SPX Monthly Swing Chart had turned up, I mentioned that if the rally maintained traction and momentum that we could get two monthly higher highs.

The earliest that could happen is the beginning of September.

This would put the SPX in the monthly Minus One/Plus Two sell position.

In May 2008 the SPX traced out two monthly higher highs just prior to the Leman Crash.

This was “in the spirit” of a monthly Minus One/Plus Two.

I say “spirit of’ because the 3 Month Chart was NOT pointing down albeit a serious downdraft had preceded the May peak.

The bottom line is two monthly higher highs in the context of a primary bear market can trigger a Get Out Of Dodge sell signal.

This would be triggered on breakage below the prior swing high on the SPX…the early June high at 4177.

So Heads Up if we should knife back below 4177-- especially if we get two consecutive higher monthly highs first.

That could seal the deal for a large downdraft.

These numbers are 180 degrees straight across and opposite August 28th.

In sum a continued rally in August, pullback or not, into the end of the month/early September jives with some historic peaks:

The August run in 1987 peaked on August 25 prior to a crash in October.

The August 31/Sept 1 Secondary High in 2000 prior to a devastating bear market in the NAZ mirroring the carnage in the aftermath of the 1929 top.

The September 3rd top in 1929. No words are necessary.

21 aligns with mid-August on the Square of 9.

In sum, the rally continues, BUT the internal weakness is becoming extreme.

While the SPX and DJIA today struck a new recovery high on Tuesday, the overall NYSE/NAZ breadth was negative overall.

The NAZ closed down 25 points.

As the rally gets thinner, VIX has been moving higher-- contrary to the normal direction that VIX moves in a bull market.

Now some may argue that the higher the market goes in a relentless manner, the more market participants look to buy insurance or hedge…ie a rising VIX.

However, in real work, the higher the market goes, the more COMFORTABLE players are.