Following the springboard from a backtest of its 50-day line on July 26, the SPX traded in an exceptionally narrow range on Thursday.

The SPX may have simply paused after a torrid  6-day 257-point run, or it may have been that traders were reluctant to make decisions ahead of the NFP report this morning.

In fact, the SPX carved out an N R 7 Day. These are the narrowest ranges in 7 trading days and, typically, they see an expansion of volatility in the next few sessions.

Interestingly Thursday’s NR 7 Day was also the 7th day up from the July 26 test of the SPX 50-day line.

Earlier this week we wrote about the Smitah 7-year history of which 2022 falls.

Long-time members recall that one of the factors in my anticipating/forecasting the market would get hit hard in January was that Jan 2022 is 7 squared years, or 49 years, from the early Jan 1973 top.

That top preceded a persistent bear market as well.

That alone is reason enough to chalk up the current rally as a relief rally within the context of a bear market.

As well, we’ve discussed a Fibonacci Cluster in the first half of August which is also the 40th anniversary of the August 12 major bear market bottom.

That low was followed by a historic, explosive kickoff…much like the thrust of the March 6, 2009 bear market bottom.

I think this could turn out to be a big deal.

Gann stated 7 is the fatal number.

Those crashes were seared into The Streets memory in both instances on the 7th day from the 49th day.

Ie 56 days from the all-time highs seen in both those years.

And they say crashes don’t happen from highs?

So this 4900-day window from the historic March 6, 2009 bear low is something to be mindful of from my perch.

Maybe something happens right here, maybe not…but just as the aforesaid crashes 7 days from the 49th day from the peak, I can’t help but think that the 70-day time frame from today may be very important.

In sum, I think we carve out a high of some degree here and pull back. The nature of that pullback will tell the tale of the tape for this rally phase.

Let’s take a look at the setup through the lens of the NDX. 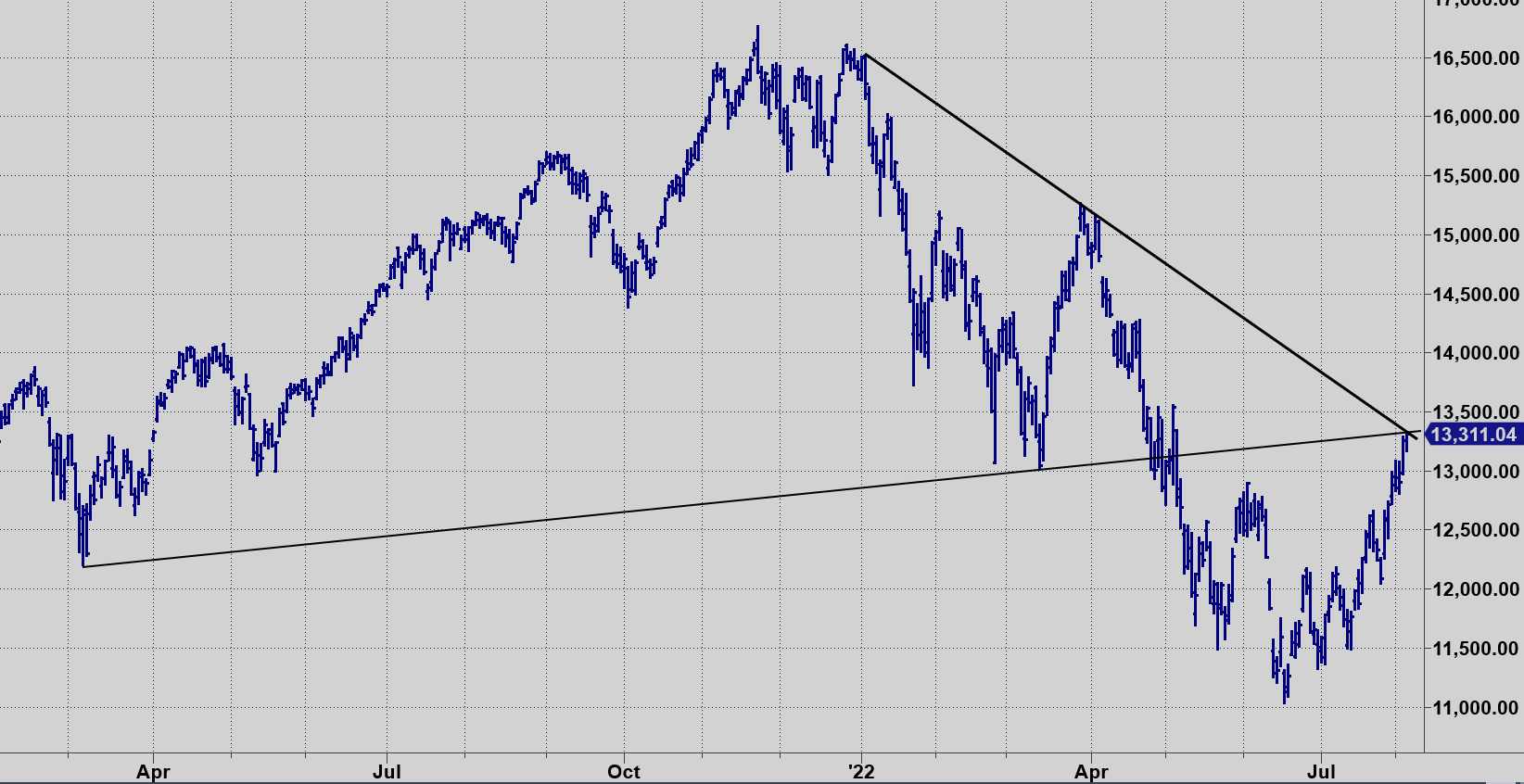 I connected the two most important lows on the chart-- prior to the leg down into June 2022.

So this trend line defines a one-year cycle in progress.

The NDX topped in November 2021, but it was in early Jan 2022, synchronous with the SPX that the snowball from hell started downhill.

So I used the early January high as a pivot from which to take my trend line.

If that is correct then the NDX is at a picture-perfect point to find a secondary high-- a Wave 2 corrective high.

Wave 2 corrective highs are followed by powerful legs down.

If this count is correct, the NDX is going to knife below its June lows before the second half is over.

Let me put it this way, to echo my forecast in January, markets will get hit hard in the coming months for what may be a record drop.

Alternatively, IF the NDX is able to eclipse this 13,311 level where these two important trend lines meet, then the rally can draw in more players….for the moment.

That said, there is reason to suspect this 13,311 region is quite pivotal.

Moving the decimal point to work with the Square of 9 Wheel, we get 133. 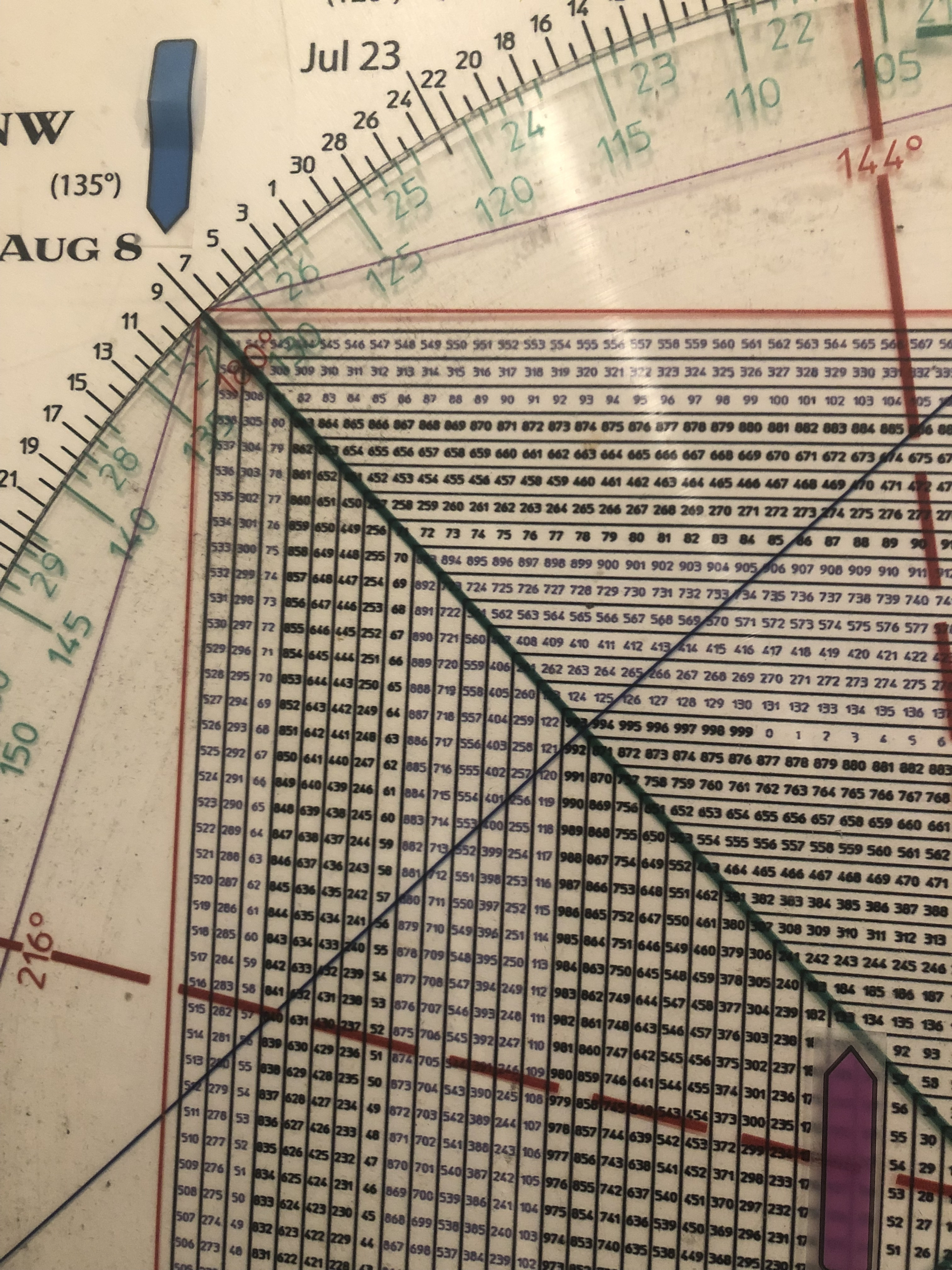 Regardless of the market’s reaction to today’s jobs report, Monday should be quite interesting.

I don’t know what the Jobs Report will say or what the reaction to it will be.

But, nearly every report this year saw a rally in the SPX for at least a day after the report.

The rallies were short-lived being followed within a few days by a sharp drop.