There’s Something About Jerry

Gold broke down from the bottom rail of a trend channel (brown) five weeks ago. 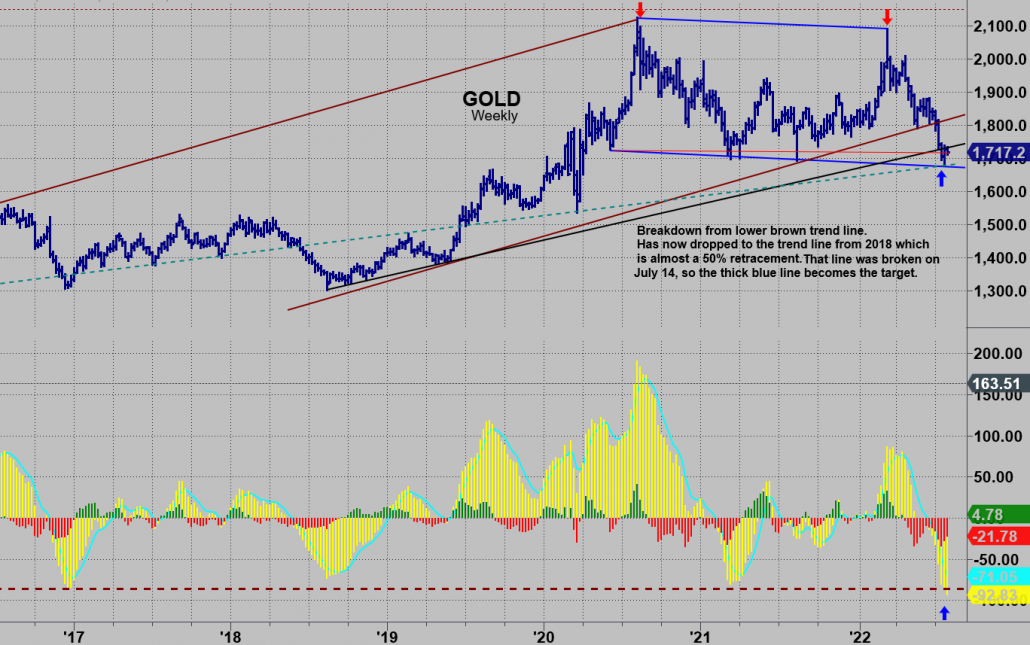 The break perpetuated an acceleration to a trend line from 2018 (black) which is almost a 50% retracement.

The black line was broken this month sending gold to well-defined support at the blue trend line at the 1675 region.

Notice that the blue trend line is the lower rail of a channel that defines double tops. It’s a compelling channel.

This coincides with the dotted light blue Ghost Line going back to 2017 (60-month cycle).

So the Rule of Multiples is in play.

Interestingly, NEM’s wash-out this week corresponds to the long setup in gold.

My expectation is that reclaiming the black trend line in the low 1700s should deliver a rally to the low 1800s-- a backtest of the brown trend line.

This is why we bought September calls on GLD yesterday.

If a rally to the low 1800s plays out, we’ll have to see how gold behaves at that juncture.

In sum, August/September have been big spike turning points this century….the tops in 2011 and 2020.

Is another up spike on deck with gold running $200?

As tweeted yesterday, the QQQ turned down their 3-Day Chart.

Each time they have done so since their mid-June low has defined a low.

These are June 30 and July 13, both of which traced out higher lows from the mid-June low.

If the same behavior plays out from yesterday’s turndown, it will leave a 3rd higher low.

As well, yesterday’s turndown occurred on a back test of the QQQ 50-day line.

This morning’s upthrust on the futures suggests the impulsive move I was looking for yesterday above 3950 is playing out.

If so, the SPX should challenge 4020. If that attack is successful, the SPX Monthly Swing Chart will turn up in early August on the way to 4100 +.

As I often say, markets play out in three’s.

We have a possible good 3rd higher low on the Q’s on a 3rd turndown of the 3-Day Chart.

As well, gold setups up a rally off triple bottoms.

Maybe the market knows something about Jerry today?