Did the Fed Kill the Metaverse?

The Fed sent Wall Street into panic mode in 2022.

High-growth tech stocks have been pummeled after soaring through 2020 and 2021.

And even the Metaverse isn’t immune.

The metaverse was all the rage at the end of 2021.

Facebook even changed its name to Meta Platforms (FB) on October 28, 2021.

CEO Mark Zuckerberg said, “We believe the metaverse will be the successor to the mobile internet, we’ll be able to feel present – like we’re right there with people no matter how far apart we actually are.”

People were even buying real estate in the metaverse — with real money.

The Metaverse Group has sunk more than $10 million into digital real estate and is the de facto “landlord” of the virtual world.

The 2021 Metaverse report from crypto asset firm Grayscale said, “the metaverse represents a $1 trillion annual revenue market opportunity.” Keep in mind that according to the World Bank, only 16 countries have a GDP over $1 trillion.

And then the Fed decided to tackle inflation and ruined the party.

The Fed will also begin the runoff of its $9 trillion balance sheet in June.

And 5 more rate hikes are on the schedule this year, with the federal funds rate expected to top 3% by year-end.

These actions are meant to reduce the money supply in the U.S. economy to squelch consumer demand that is outstripping the supply chain.

But traders are worried that will cause a recession.

And that fear has driven a major revaluation of high-growth tech stocks that soared throughout 2020 and 2021.

Metaverse stocks are one sector that’s been hit particularly hard… even though it's supposed to be a trillion-dollar opportunity.

Let’s take a look at my previously chosen 5 Top Metaverse Stocks to Watch and how they’ve fared in the 2022 tech rout. 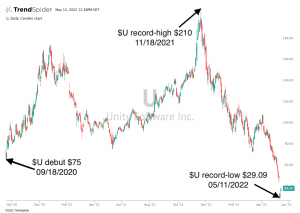 That makes it one of the biggest losers among “metaverse stocks” in 2022.

The video game software company got rocked this week by earnings.

Although Unity reported Q1 results in line with analysts’ expectations after-hours Tuesday, the market was focused on guidance.

The stock cratered 37% on Wednesday and notched a fresh record-low during the session.

The drop wiped out $5 billion of Unity’s market cap.

Unity’s plunge from its all-time high is even more severe than the YTD drop.

Since then, Unity shares are down more than 80%. 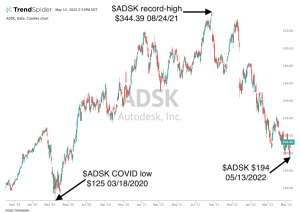 Like the rest of this sector, Autodesk (ADSK) has fallen sharply in 2022.

But this drawdown isn’t as severe as Unity Software.

Autodesk shares are down about 30% YTD.

The stock is faring worse in the 52-week range. 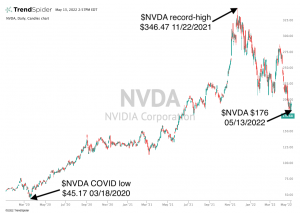 The chipmaker’s stock is down about 40% this year.

And the stock is doing much worse in the 52-week range.

Nvidia’s focus on gaming and graphics processors makes it a key company for the future of the metaverse.

The company is scheduled to report fiscal Q3 earnings on May 25. 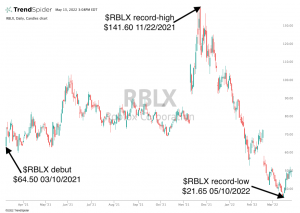 Roblox (RBLX) hit a fresh record-low this week before bouncing back some.

The company reported mixed Q1 results after the close on Tuesday.

Those results initially dented the stock but traders turned around their sentiment after optimistic comments from the CEO Wednesday morning.

But when you zoom out, the stock looks just like the rest of this sector.

RBLX shares are down nearly 70% YTD.

And it’s even more discouraging when you look at the drawdown from its record high.

Since then, the stock is down more than 75%. 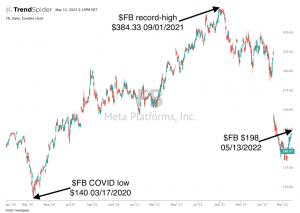 The collapse of Meta Platforms (FB) has been one of the biggest stock stories this year.

We all remember the stock plummeting 26% on February 3 following brutal Q4 earnings.

That drop alone wiped out more than $250 million of FB’s market cap and was the worst day in company history.

And it’s gotten worse since then.

The company now plans to cut its metaverse-related spending… less than a year after the rebrand.

Reuters reported Thursday that the Reality Labs division at Meta is bracing for a slowdown in spending.

The company’s chief technology officer reportedly told employees they would not be able to afford some planned projects and would need to postpone others.

The company betting its entire future on the metaverse (so much so that it changed its name) is slowing down its spending on developing the metaverse.

Although this sector has been beaten down in 2022, analysts still believe the metaverse is the future.

Citigroup says the metaverse “represents a potential total addressable market of up to $13 trillion by 2030, made up of 5 billion users.”

Is now the time to buy the dip? Let us know what you think in the comments below.