How to Catch Short-Term Reversals
THE RDR Method

Today, we’re getting into the Red Dog Reversal. Think to yourself: have you ever seen me talk about this? I'll be honest, the Red Dog reversal has taken lots of different forms.

Because of the type of trading we have in the age of computers, it's become a way to judge whether a train could reclaim prior lows and becoming action area trade or ways to really spot major reversals in different sectors.

It gives you concrete parameters, so you can use it as a concrete system and tweak it a little bit according to your own risk parameters.

Here’s one other thing I want to cover: when stocks are pushed in the same direction for 2+ days, fear and greed builds, and people start looking for a way to catch the other side of the trade.

In a bit I'll show you the psychology behind it, plus why a reversal in the trend catches traders off guard and turns an action area into a really really fast trade.

That's why I love it - it creates a fast trade and then sometimes gives you a bigger trade.

Active traders we like fast trades and  swing traders like calculated swing trades that they can stay with. So as we get closer to the actual chart, I want to keep giving you guys some of the parameters. 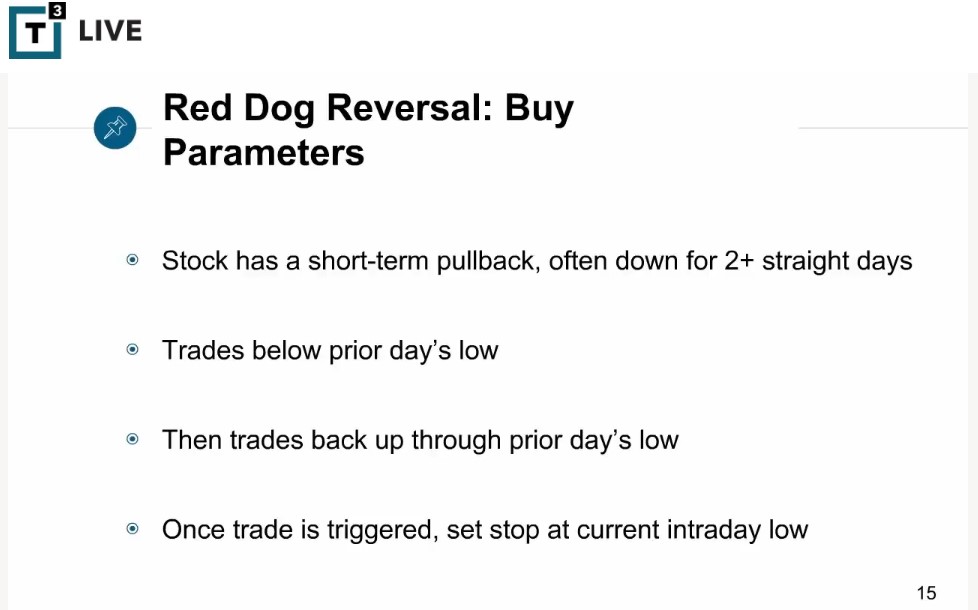 Here is the Red Dog Reversal by parameter stock is a short-term pull back often for 2+ days and trades below a prior day low. The importance of that is if you're going to be down for several days, in order to go from down two days to down three days, you have to trade below a prior low.

So that's why we judge the low again in order to have a 50 low. What do you have to do? You have to get below and stay below the fourth day low.

The importance of that is when it trades back above the prior day low, you're going to only have two down days. It's going to get below the second day low come back above it, then there's no three, four, or five day lows.

So if they were shorts looking for a down day, there's only two down days and now it's a reversal up.

What Do I know?

I'm going to show you. I just want to give you a little bit of the psychology of why that low becomes such a battleground spot. Once that trade is triggered you then could buy when you get back above a second day low and then what you'll do is you will put a stop below the third day low.

That prior day low is your action area and then you know that the day's low is will be your stop. That's why you have your risk defined. Usually what you want to do is take a third home as a swing trade, because sometimes you caught some type of bottom tail. 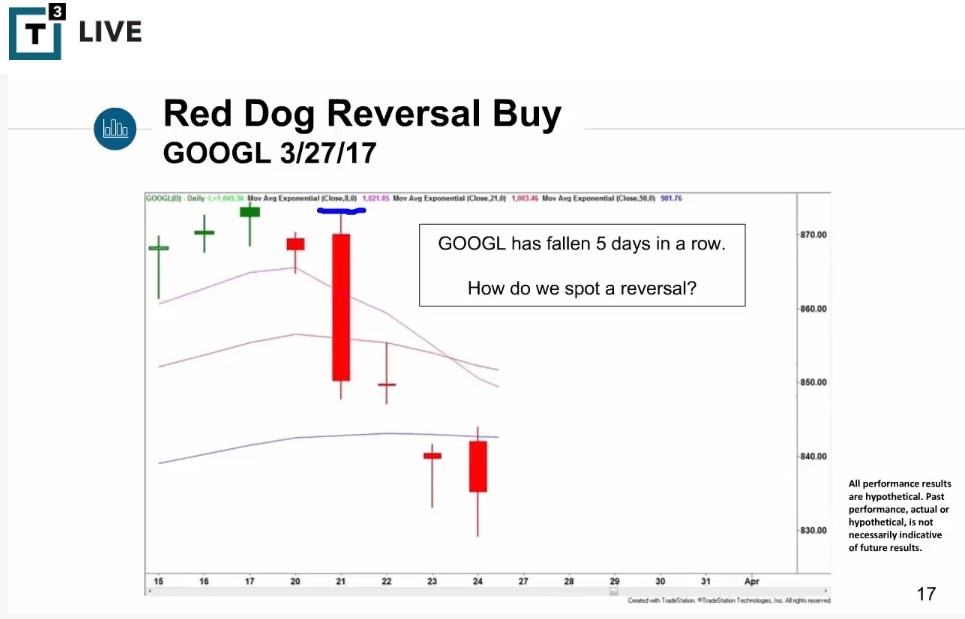 Okay. The next day I ask myself, ‘What do I know?’ All you know is the prior day low. That's it.

So that becomes an opportunity for you. So again, 829.10 is all you know. So, if the next day breaks below it or comes back above it, you're a buyer and then you're putting a stop in at that day's low. 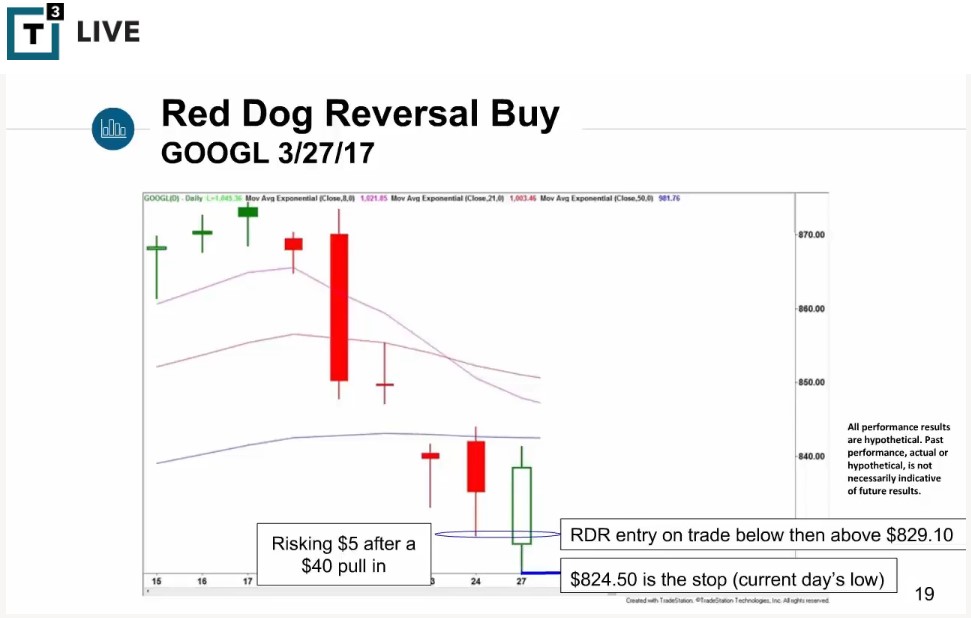 This is a battle between the Bears in the Bulls - the Bears think it's going lower and are shorting it, and all of a sudden goes below comes back above, so they’ll want to cover. It could bounce.

They're thinking that they just missed out and want to be a buyer here because it eventually went below and stayed below. That's the strategy - clear-cut, very simple.

Here’s what some people will do: I think this closed near 40, so you made for yourself about $11 on $5 risk 2:1 - not so bad. They’ll take a third and put a stop in just in case it bounces more than beforehand.

This is a way to manage the trade because you had buy area #1 and now perhaps you get buy area #2. So the question is, how does that develop?

The Tier System and Trade Management

I talk into tier systems because tier systems help everyone know what I'm talking about. Shares mean something different to everyone. Anyone who's a subscriber to my service, I'm talking to you in tier size, no matter how much money you manage. 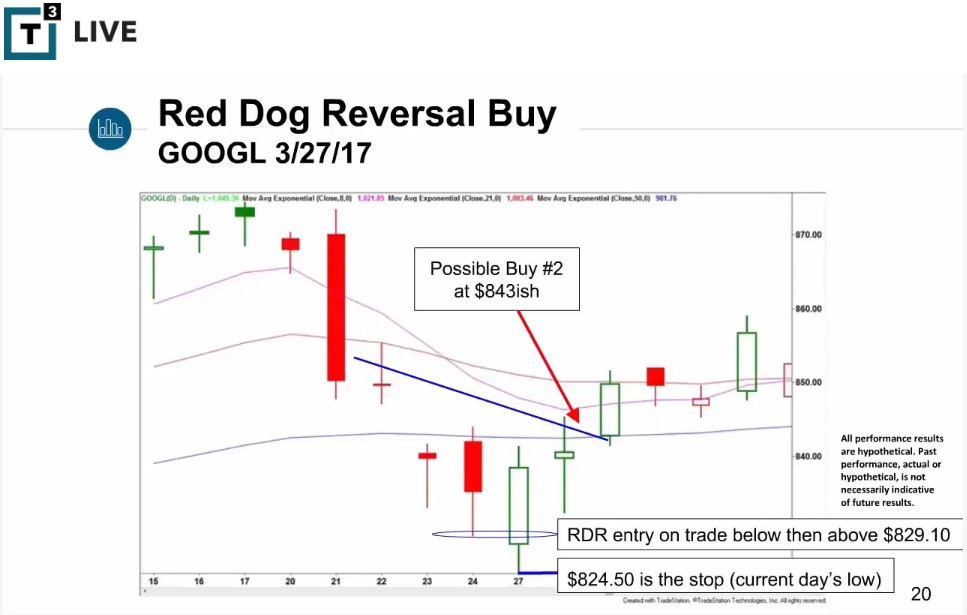 So right here, you could have had your Tier 1, or Tier 2 and back to 1 held a third and then, when it cleared a four day range, this could have been your second buy. So now all of a sudden you're still in from 829 with $5 worth of risk, and now you're adding above because anyone who shorted thinks they need to cover.

That's your buy and you could have decided you were going to get back to what you had, and still ride the trade from 829 to 850 with another cash flow spot as a second trade. That's how you use a tier system and that's how you do trade management.

So all-in-all this trade wound up going up to about 860 before you had a manage it, but really the Red Dog Reversal took place right there after for down days, very calculated. 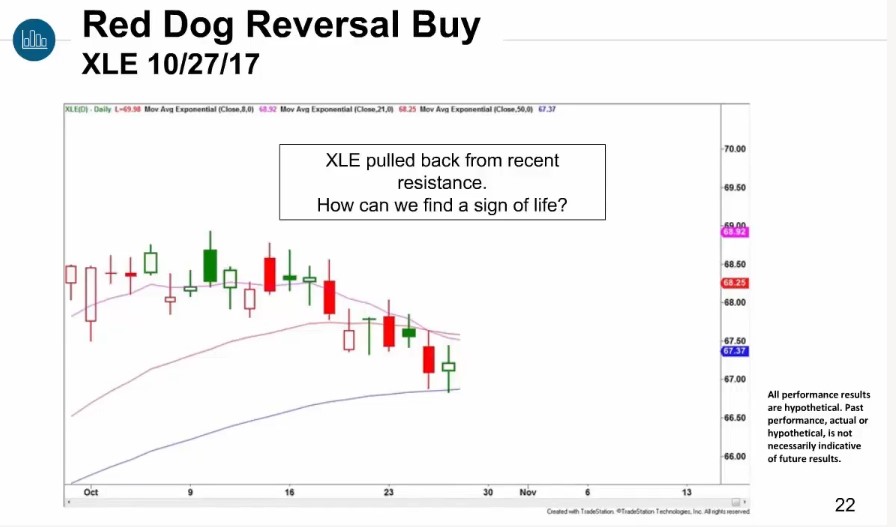 Now I want to show you another Red Dog Reversal. This is the XLE. The XLE recently pulled back when it hit as high as 69, which was the first resistance there. It pulled back from 69 all the way down to the low. So again, what's the question?

This looked actually like a little RDR where you could have made a little bit of money because it went below and came back up. So, you could make a day trade. But if you took home a third, you might have given back the day.

That’s why I only take a third: you want to net money. You never want to put all the money you made in one day at risk. So this was a small RDR that didn't stick. Let’s check out why.

From 69 to 66.82 is a decent pull back. So that is all you know. If I was discussing this in my morning note I would say that the XLE hit a high of 69 and pulled back to the low of 66.82. It did a minor RDR. Let's see if it goes below, reclaims it, and tries to give you a more compelling one.

So the next day this is what happened. 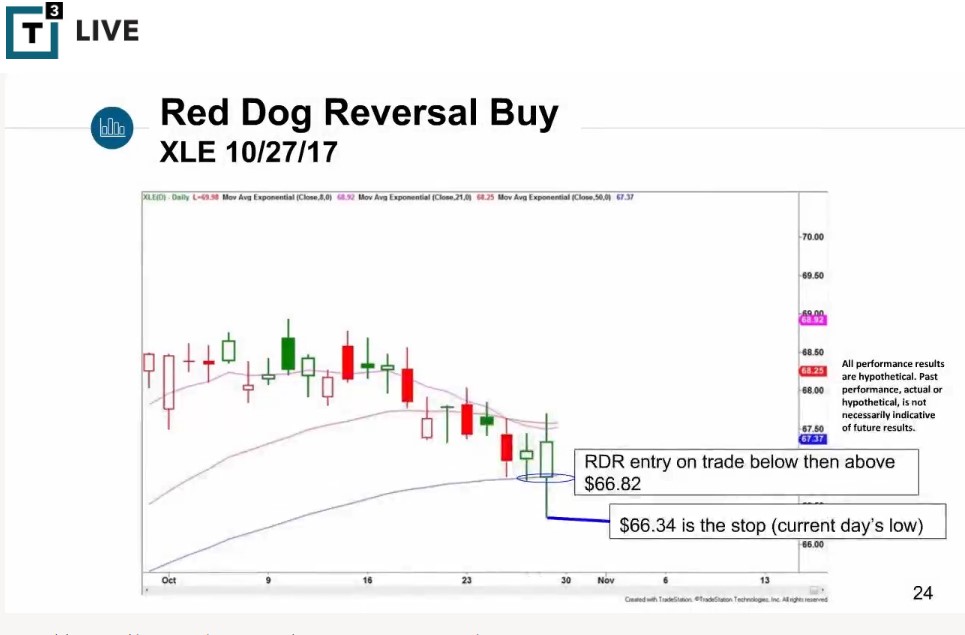 Traded below 66.82 hit a low of 66.34. So what do you do? Buy it low. You might have even lost money on the third. But you gotta do it. Probability say that's what you do. This one came up a little bit and now reclaimed the 8 and 21 day.

Remember we talked about when things are above the 8 and 21 day, they're a little bit better. So that’s buy area #1. You might not have even added to it. Maybe you did if you are very active in The XLE.

Typically I’m not, but I was on CNBC talking about how it was a decent trade during this time period. 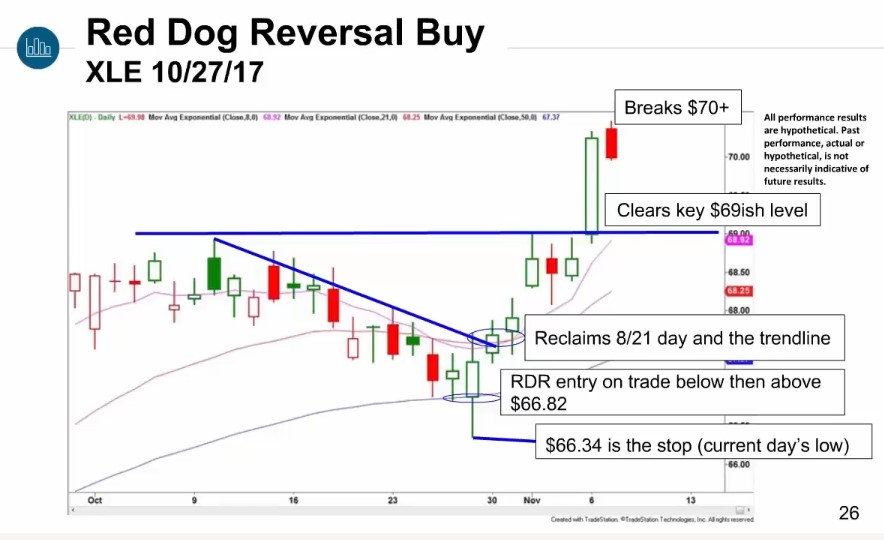 I remember this: it went sideways and give you an extra trade above 69 to as high as 70. So from 66.82 you had a great day trade and then maybe a held a third. I was looking for a little momentum trade above 69.

The Key is Defined Risk

The tactic asks you to answer how you would take a descending trend line here and then find the pivot area, where there's a fight between the Bears and the Bulls. The Bears are saying oils going back lower, this is baloney, this was just an oversold bounce.

The Bulls are saying they think this is a viable pull back for another move here. And that's pretty much exactly what happened. And if you want to take a look at the bigger picture, here it is: 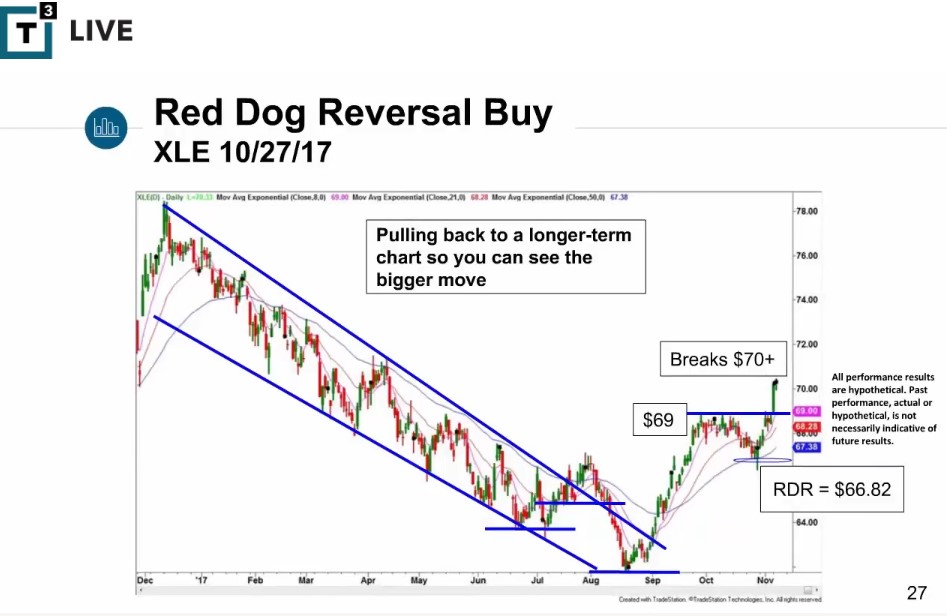 That was your RDR.

November is when it took out the 8 and 21 day and that was your move to some bigger resistance. That was a really nice little move in the XLE that was hard to catch unless you really knew how to trade these type of tactics.

The key here is defined risk. 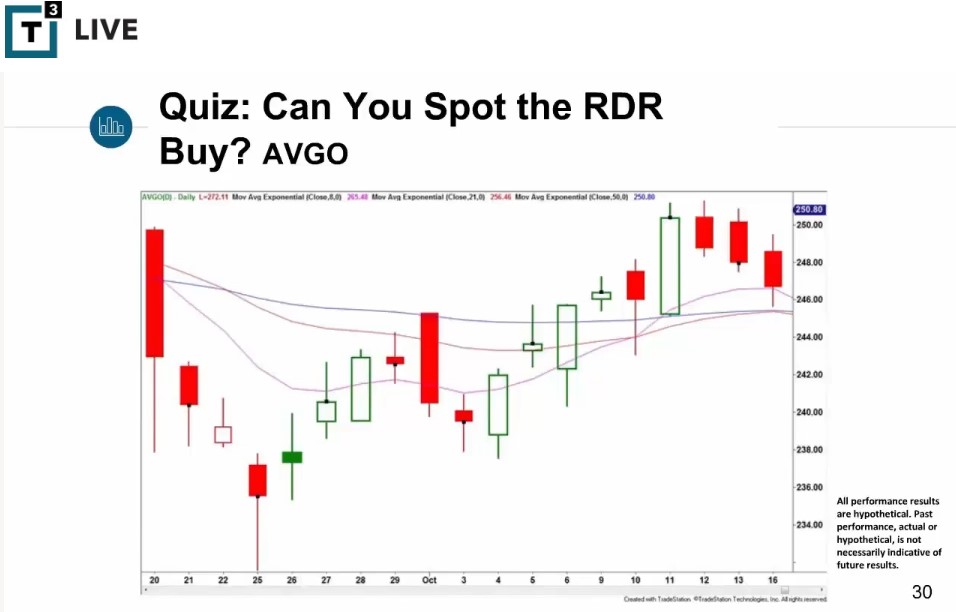 This one was a lot of fun for me and for my community. We had options on before it cleared. Can you spot the Red Dog Reversal? Take a look. You could have seen a day or two pull back in order to get long for what will end up being a really nice move.

So let's show you here: 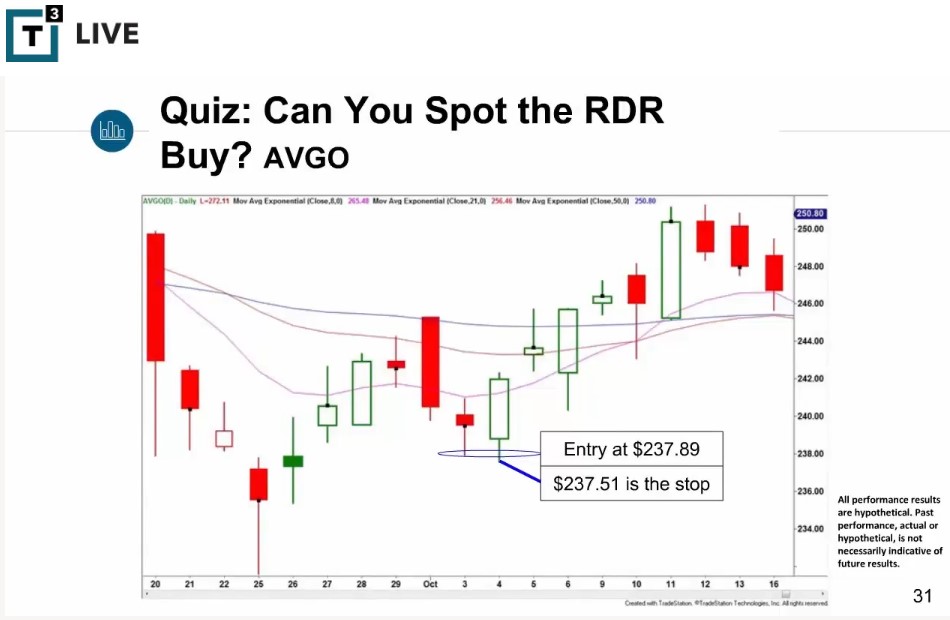 There it is. Boom.

From 246 it went all the way down about 9 points, went below 237.89 - by 30 cents, and I remember that, too. So your risk was $.30 and then wound up giving you a great day trading and actually even took out a prior high, which showed some power.

All in all a nice day.

So, that's the tactic: You’re mechanical, it goes below and comes back above, and you buy.

If you use it to your system, you could have taken buy #2 on the close and then taken a third instead of giving back what you made this day, because this was an excellent day. 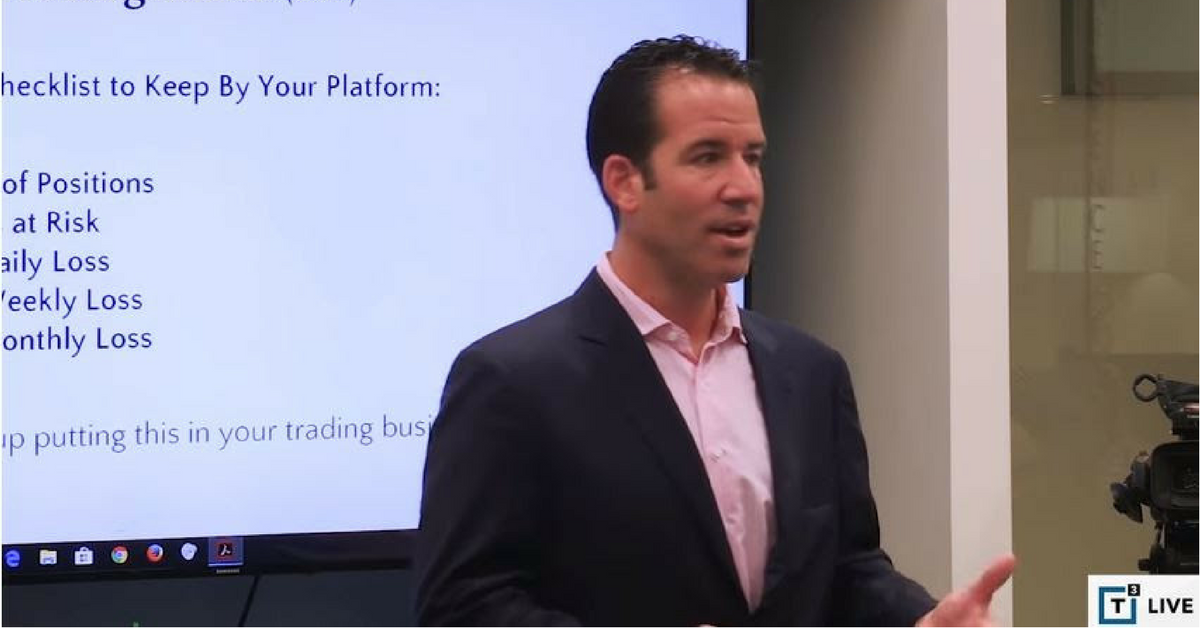