Twice Upon A Time In America

Based on the geometry of the price action off the 3980/4020 key “squares,” we were looking for a Turnaround Tuesday Gap & Go to the topside and we got it in a big way — up 50 SPX points until the CPI hit, sending the index reeling down 50 points.

It looked like the “Flying Elvis” pattern forgot to pack a parachute.

But, remarkably, the SPX shot back to test the morning high.

Mr. Market doesn’t jump out of planes without packing a back-up chute.

It’s not often that you see two chutes fail in one free fall, but that’s exactly what we got on Wednesday.

Apparently the Bear packed the chutes and his claws made a mess of things.

Instead of the usual one of two intraday reversals, Tuesday gave us four as mega caps AAPL, MSFT and TSLA nose-dived.

AAPL broke the weekly trendline flagged in this space last week while TSLA dropped to our 740 projection.

There are crashes and there are crashes. This has been a slow motion car crash ever since the market was “relieved” to hear that Powell wasn’t “actively considering” a 75 basis point rate hike.

As stressed last week, counting from the March 29 recovery peak, we are in the eye of the Gann Panic Window which ends anywhere from May 16, the anniversary of the Buttonwood Agreement that started the NYSE, to around May 21.

The 49-55 day Panic Window exerted its influence in both 1929 and 1987 with capitulation turning into pure panic.

With the SPY closing solidly below 389, which is one 360 degree price cycle from high, it opens the door to the next 90 degree decrement lower, or 378.

Unless the SPY recaptures 398 quickly, it’s in a vulnerable position — especially given the Panic Window.

That said, the first leg down on the SPX into Feb 24 was approximately 700 points.

As well, using the number grid on the Square of 9 Wheel as a year instead of a number shows that “2022” the year vibrates/vectors May 10/11. That suggests a turning point MAY be on the table.

The synchronicity suggests at least another rally attempt. However, time is more important than price, and the Gann Panic Window is open and high-fliers that are down 70 and 80% are still getting pummeled.

Buyers are deers in the headlights and the bear and machines are having a field day with impunity along with the unintended consequences of inverse ETF’s, which could theoretically create a meltdown.

If a meltdown is on the table right here right now, this region will act as a magnet before the 2nd half is over.

In sum, this is a classic 3rd of a 3rd wave to the downside and anything can happen just like 1929… only this time the leverage and printing were exponential.

The next few hours/days may be historic. 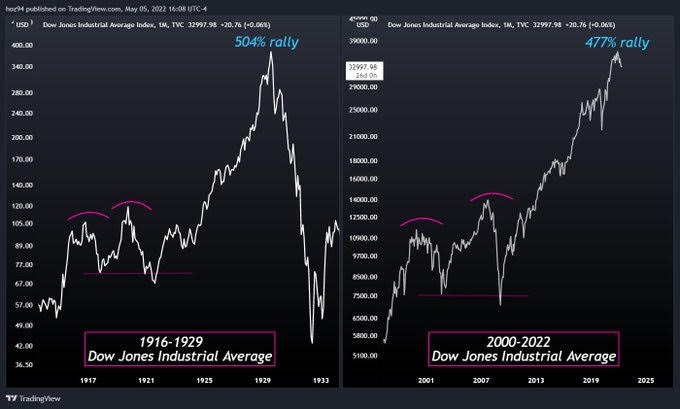