Monday’s gap down echoed the pattern from Black Monday, 1987, where the indices gapped lower and picked up downside momentum throughout the day, closing on their low.

I suspect there were more than a few market participants expecting the same yesterday with the SPX down 175 points mid-day — undercutting the October 4278 low in the process.

But there’s always a T Rex in Mr. Market’s ointment. And we know that last week was the end of the Gann Panic Zone, so we were looking for any trace of a reversal of fortune.

As well, the SPX had dropped to the bottom rail of an important weekly channel.

When the SPX pushed back through the morning low, as offered on the Hit & Run private Twitter feed, our Jackknife buy signal was triggered.

This occurred at a price of 4272 and we tweeted to take TNA long for a trade around 56.

Subsequently, as the index pulled back, we flagged the potential for an intraday inverse Head & Shoulders.

In fact, a picture perfect right inverse shoulder played out and the SPX rocketed higher.

A late day up ORB (arrow) was triggered when the index took out the morning high, perpetuating a drive to the open gap and short term resistance into the bell.

As I write this on Monday night, the futures are in a deep pullback. We’ll see if the Neckline at 4340ish acts as support.

Clearing that opens the door to 4510-20, which is the mid-channel paralleled off the early March 2021 low.

Monday’s action was a good example of the benefit of the interactive Hit & Run private Twitter feed, where we make actionable calls as the price action unfolds.

For example, on Monday:

SNOW from 255 closed out before the bell.

NET long on an Opening Range Breakout for a day trade at 89.

In sum, the SPX rallied an impulsive little 5 waves up from Monday’s low.

That’s bullish short term, but A waves can be 5 waves too.

It looks like we’re getting the B wave pullback tonight. If correct, it should be short lived with the index reversing to the topside to the 4450 region.

It’s hard to argue that the last 3 to 4 sessions have not been a powerful 3rd wave decline.

That means an A B C rebound phase for a 4th wave should see a 5th wave decline that tests/undercuts Monday’s low before a larger rally.

So the intense volatility we foresaw for this year is in full bloom.

Indeed, the vol for January should set the tone for the entire year.

If you want to extract money from the market in 2022, you’d better get the help of a market technician/timer.

Conclusion. Our forecast that “the market would get hit hard in January” made in early mid-December has certainly played out with a 10% decline for the month.

I believe this has happened only 4 times in the last 30 years.

Large losing streaks such as we’ve seen since last week tend to occur at the start of trends, the mid-point of trends, or the end of trends.

Based on the structure of the market and cycles, this large range losing streak is occurring at the start of a trend.

Not all Big Green’s are the real deal.

That said, it’s a market of stocks, not a stock market, and the upside reversals in names like ETSY, ASAN, RBLX, FND and SNOW, to mention a few, suggest the market can push higher.

At the same time, IWM carved out a massive reversal. Based on my Square of 9 Wheel, it projects to 205.

Checking the Square of 9 shows that 244 is 180 degrees straight across and opposite January 24 for a beautiful Time/Price square-out. 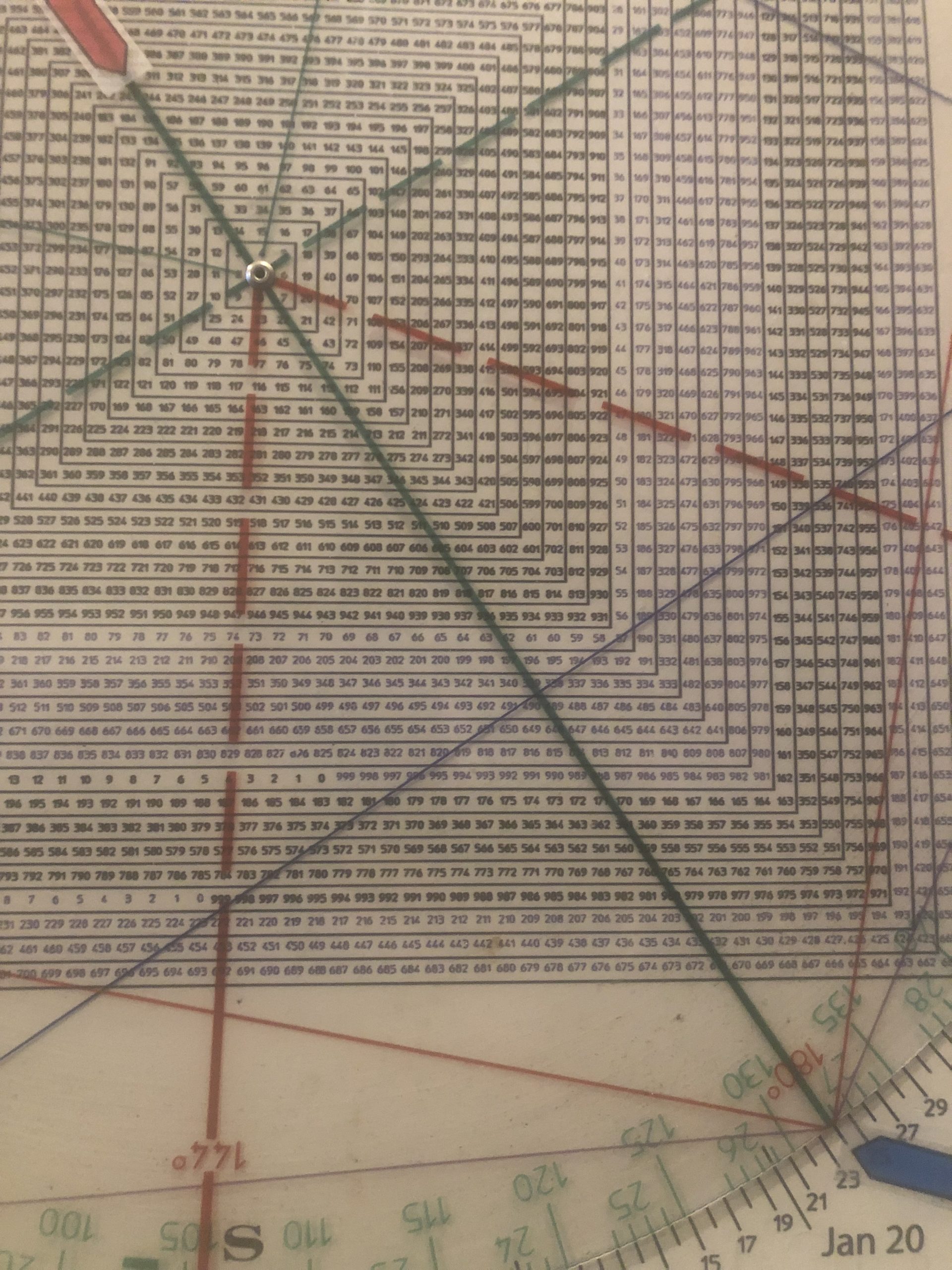 Today’s IWM low was 191. It closed at 201. IWM responded magnificently. That’s the power of the Law of Vibration as expressed through the undeniable Square of 9 Wheel.

However, it will take a Follow Through Day, continuation on the 4th to 7th day off the low on an expansion in volume, to signify a genuine Selling Climax and change in trend has occurred.

Previous Post Where is QQQ Going Next? Next Post The ARKK ETF Bloodbath: 7 Things You Need to Know