“Let’s get together and do it again” – The Beach Boys

“To err is human, but to persevere in error is only the act of a fool.” – Cicero

“That which is not yet, but ought to be, is more real than that which merely is.” – Zoe Lund

While the NAZ topped SEVEN weeks ago in mid-February and IWM in mid-March, investor mania found a new home in NFT adjacent to the continued mania in cryptos alongside a new high in the SPX on Friday.

This year, a digital picture sold for $69 million.

People are willing to pay huge sums of money for pictures of something.

It seems people’s willingness to assume risk has reached a status paralleled only by Icarus and his dream of flying.

We all know that his token wings proved to be fungible.

I’d call it investor’s willingness to assume risk (versus “people’s”), but I don’t even get the sense that these are investments or speculations as much as they simply reflect herding instinct… a mania driven by F Money.

Funny Money… if you will.

I suppose this is the natural and opposite end of the spectrum where people scramble to buy bonds although they pay zilch… when inflation is considered.

They say they don’t ring a bell at the top… what about a symphony of bells?

Speculations that have melted down in the first quarter include SPAC’s, IPO’s, Tech growth glamours, GME and the rest of the Reddit wrecking balls, EV’s and alternate energy plays. Even blue chips like VIAC got airpocketism.

Bitcoin picked up the slack. Some say Bitcoin is a safe haven.

If so, volatility must be at home in heaven.

Investors don’t care what bells may be ringing.

They have seen the market snapback twice already this century. The current 85% boomerang in the aftermath of last March’s selling tsunami tangential to a global pandemic that is mutating and still with us, seems to have sealed the deal on the Buy & Hold mentality. If the market can come back this strong from this dour global circumstance, then it just “proves” how strong the trend is and how much longer the party has to go.

After all, to a blind man on the Titanic, the sound of violins meant a party was starting.

This last year’s rip in the face of a pandemic only served to “prove” to long-term Buy & Hold investors that a Buy Hold & Sell approach is foolhardy.

The last year exemplifies the passive, systematic, zombification of the markets.

It has hijacked the fight or flight naturally occurring behavioral response when we feel threatened.

Because, presumably, what the last year has proved is that logic and timing cannot be applied to markets.

I’d say considering how bleak sentiment was in March 2020, a year is quick for this advance.

In fact, on the anniversary of that low, the SPX finished its best 12 months in history.

Not only did it have its best 12 months in history, but unlike the Great Financial Crisis, the market “V’d” off the bottom a year ago.

In contrast, the GFC bear consisted of a primary low in November 2008 and a secondary low in March 2009.

This is one of the reasons I thought an advance to 4000 SPX could occur relatively quickly — I thought there was a Rule of Alternation on the table — that a test was not in the cards.

In other words, when a prior extreme is tested/undercut, there is a strong likelihood that the next low will be a “V” without a test (ditto for tops).

The relentlessness of the last year has left its mark on market participants' psychology.

Citi’s Euphoria/Panic Sentiment Model below shows how the near doubling of the SPX in just a year has disabused investors of the notion of risk. 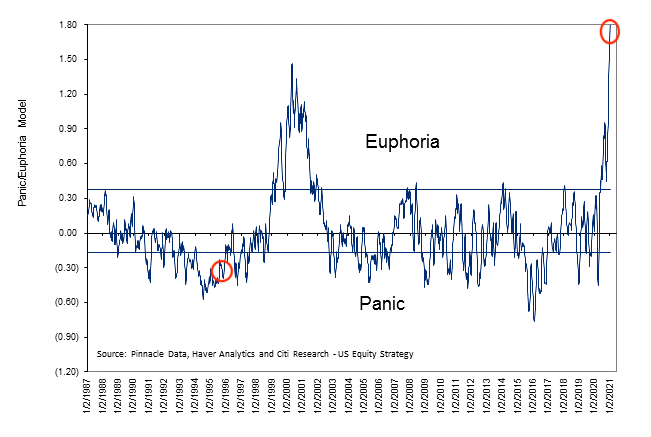 The takeaway is that, since 1987, the market has topped when this index has approached the Euphoria Line.

Notably, the two exceptions were in the year 2000 where the indicator spent 3 years in the euphoric zone… and right now.

I can’t help but wonder if the Rule of Alternation will strike with the current spike being relatively short-lived versus the pattern 20 years ago.

So the big question is whether momentum is friend or foe now.

In other words, does the current momentum in euphoria, call it the Icarus Factor, buy the market time — as was the case 20 years ago — or have market valuations flown so close to the sun that they meltdown.

The answer to the question may be revealed by the best trading tool on the planet…The Square of 9 Wheel of Time & Price.

Time and price harmonics based on my Square of 9 Wheel mirror a similar pattern from the SPX advance from the 2002 bear market low to the 2007 bull market top as does the SPY now from the 2009 low to just above current levels. Caution is warranted here and now… backstopped by an array of historic divergences outlined in this space over the last two weeks.

If I am correct, markets will tip their hand before April is over.

Nicola Tesla said, “If you want to find the secrets of the universe, think in terms of energy, frequency and vibration.”

W.D. Gann wrote, “Vibration is fundamental; nothing is exempt from this law; it is universal, therefore applicable to every class of phenomena on the globe. After years of patient study I have proven to my entire satisfaction as well as demonstrated to others that vibration explains every possible phase and condition of the market.”

Harmonics are the basis of all insight to the future.

This is the essence of the Square of 9 Wheel pictured at the bottom of this article.

Nearly every day a certain kind of event which we call coincidence occurs in our lives.

Two things happen and the way they are connected gets our attention for one reason or another.

Some of these coincidences do not have much of an effect on us, either emotionally or intellectually.

That is to say they don’t have much significance to us.

There are, as we say, “just coincidences.”

However, all of us have experienced a different kind of coincidence, a confluence of events that shakes us up.

The moment such a coincidence occurs, we know something quite important, something meaningful, is happening to us.

We can see and feel a significance in the randomness.

This how a great trade or forecast often shapes up.

Things come together and the setup is compellingly tantalizing.

While to some this second kind of coincidence may look like pure chance or “just a coincidence,” our own experience tells us that something categorically different is happening.

It is this second sort of meaningful coincidence which psychologist C.G. Jung called synchronicity.

It is a coming together of things.

The market, like our lives, tells a story and my idea is that synchronistic occurrences make us aware of this fact — that there is a thread that runs through our lives that connect our days just as there is in the market.

It is this connectedness or harmonics versus randomness that the Square of 9 allows us to peek at.

I could pull my punches like most Wall Street observers with their, “on the one hand…but on the other hand…” but that’s not what this is about.

I like to go out on a limb because that’s often where one can see things better.

I don’t like to make forecasts unless there is a synchronicity of at least 3 factors pointing to something significant.

April and May are one of those times.

In sum, it will be the price action over coming days that will be judge and fury of this setup. The key pivot is the 406 SPY region.

I’ll be monitoring that price action in this space to see if the fuse gets lit and the deal gets sealed.

“Synchronicity is an ever present reality for those who have eyes to see.” – Carl Jung