A Storm Is Coming

“See the sky about to rain, broken clouds and rain

Locomotive, pull the train, whistle blowing through my brain

Signals curling on an open plain, rolling down the track again” – Neil Young, See the Sky About To Rain

“TIME is the most important factor in determining market movements and by studying the past records of the averages or individual stocks you will be able to prove for yourself that history does repeat and that by know the past you can tell the future.” – W.D. Gann

In December 1928, the legendary market seer W.D. Gann released his forecast for 1929, where he warned of panicky selling in the fall.

One of the factors that led him to make this prediction was that 60 years earlier in September 1869, there was a panic.

It is interesting that the panic was caused by an attempt to corner the gold market and cause a short squeeze.

One of the factors leading me to predict a bottom in March 2009 was that it was 60 years from the start of a secular bull market in June 1949.

These are the only two times the U.S. mainland has been attacked.

Likewise, there was a 90 degree offset between the start of the great bull market in June 1949 and March 2009.

60 months is a fractal of the 60 Year Cycle and often an important turning point.

For example, from the major low in 1932 the market ran up 5 years to 1937 when another crash occurred.

This February is 60 months from the major low in February 2016.

Taken alone this would be enough to warrant caution, but the market is rife with froth and late stage behavior with SPAC’s, IPO’s and message board frenzy sending stocks up 50% and 100% in a session.

But, when there are a cluster of cycles gathering in unison, there is a strong likelihood of a change in trend.

The Fibonacci Sequence is a number series:

Following the 1929 debacle, the market bottomed in 1932. This was the start of a long cycle of debt build up.

Sentiment is whistling like a locomotive hurtling down the tape.

The chart below shows the degree of call buying by small traders. 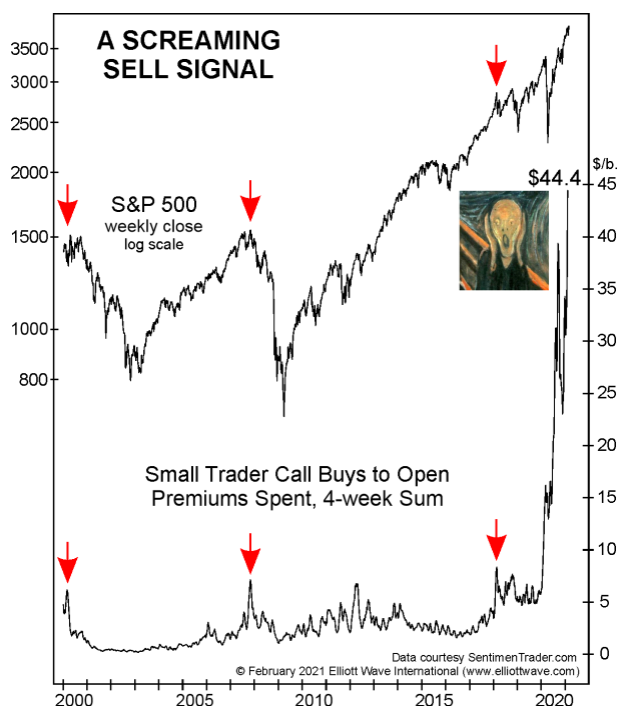 Currently this measure of sentiment is literally off the charts, like a lightning bolt that strikes before a storm

Sentiment can get overbought and stay that way for some time.

The aforesaid 5 year time factor coupled with the Fibonacci Sequence are signals that it’s about to rain.

Strategy. Yesterday the market gapped up and plunged, only to rebound and close in the green.

The idealized time frame for this to occur would be late February/early March, which is 180 days/degrees straight across and opposite the September 2 high.

As it happens, this time frame is 144 Fibonacci months from the start of this bull market on March 6, 2009.

Cycles suggest the high for the year is near.