“Have you any dreams you’d like to sell” – Dreams, Fleetwood Mac X Lanie Gardner

“Stocks are bought not in fear but in hope. They are typically sold out of fear.” – Justin Mamis

Last week the market chose to shrug off uncertainty over the stimulus package and a controversial election outcome.

Whether it is whistling past the graveyard remains to be seen, but dreams abound in recent IPO’s and speculative sentiment is running hot in several growth glamours that have taken the leadership baton from FATMAN — FB, AAPL, TSLA, MSFT, AMZN, NFLX (or NVDA… pick one).

I’ve been trading since the mid-1980s and I can’t remember ever seeing stocks that are vertical, laughing off decisive reversal days and turn right back to the topside without taking at least a few days to inhale.

Examples are ETSY, which left two reversals last week only to knife higher in their wake.

Ditto ENPH, FIVN and PTON — to mention a few.

It’s not as if these names are ripe for profit taking… they are SOS, Stocks On Stilts, so it is remarkable that their reversal bars don’t trip them up with at least some consolidation.

That said, this is the hallmark of runaway moves.

The point is when Climax Runs exhaust themselves, the ensuing downdraft is violent.

The takeaway seems to be that these grow glamours can do fine without FATMAN or the NAZ itself pointing the way.

It highlights two of my golden rules of trading:

1) It is the position of a stock that trumps the averages.

2) As long as the average aren’t pushing lower, money managers will deploy funds.

For example, on the Hit & Run private Twitter feed on October 6, we flagged that FSLY was coiled to explode.

It ripped 20 points the next day after clearing an open gap from August 6 (off all time highs), triggering a Jump the Creek buy signal. 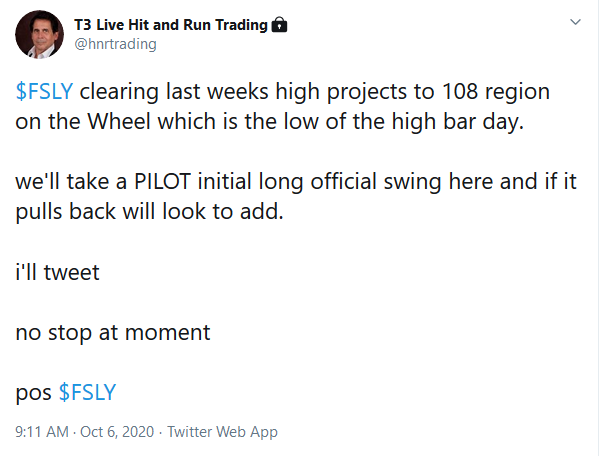 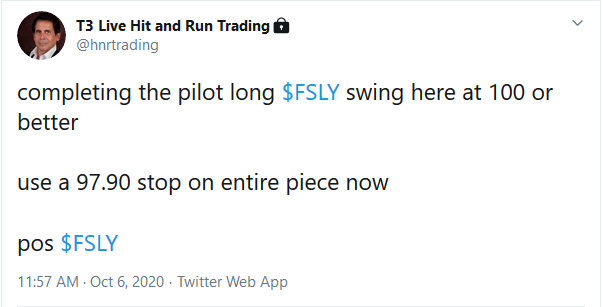 Late Wednesday, we flagged the potential for a Late Day Break Out (LDBO). 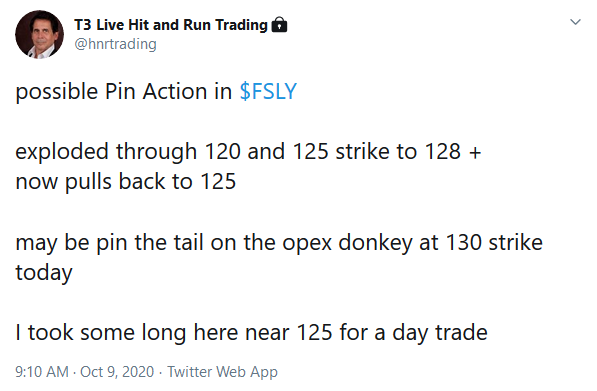 Of course, the daily charts often camouflage the trajectory to a big gainer.

Case in point is FVRR, which was a 1 2 3 long buy setup from Thursday night’s Hit & Run Report.

FVRR gapped up on Friday and pulled back into the gap for a Side Door Entry before an Opening Range Breakout triggered a Trend Day.

Stocks have been on a roll since the SPX & NAZ September 24 low played out precisely 180 degrees days from the March 23 crash low.

Stocks are making the most of that rally attempt assuming a new upleg.

However, the prospect that a secondary high following a primary high remains on the table.

Of course, a secondary high may be a lower high or a nominal new high, such as occurred in October 2007 following a primary high in July that year.

Likewise, a secondary high occurred on September 1, 2000 following a primary high in March that year.

This week is a big week because the SPX and NAZ could turn their 3 Week Charts back up.

They will do so on trade above last week's high which will satisfy 3 consecutive weekly higher highs.

IF the trend was upended with the early September reversal week, then a turn up of the 3 Week Charts will define a high soon in terms of time and price.

The big debate is whether the market started a final 5th wave in March counting from the 2009 lows or whether the blow off into September culminated a 5th wave.

There are viable arguments in both the bull and bear camps.

That said, my work suggests cycles will exert their downside influence with authority in 2021, so if a final 5th is still on the table it should be easy to tell… and should play out relatively soon.

Allow me to explain, IF the SPX and NAZ exceed and sustain above their early September reversal weeks the likelihood they will accelerate.

Notice that this is what played out after the SPX cleared its early June weekly reversal bar.

Clearing the early September large range weekly reversal would put in place a weekly Reversal of a Reversal, or what I call a Keyser Soze.

These can be lethal if you are on the wrong side.

With the amount of outflows in equity funds due to the Covid Crash in March it is possible to see a further vertical move; however, that may be part and parcel of what has already occurred and has fed on itself.

You see, Wall Street’s favorite pastime is extrapolation, and although there has already been a massive chase to put that money back into the market, it behooves the bulls to believe that dreams will beget bigger dreams.

“Thunder only happens when it’s raining

When the rain washes you clean, you’ll know.”

It’s easy to raise projections once the market has satisfied one’s expectations.

It’s not as if I didn’t expect the market to get where it got to quickly.

“The Rule of Alternation… in the bullish case is that this 2 year Megaphone may see a new bull market that will see a move north of 4,000 SPX take shape QUICKLY.” I wrote the above on March 24, 2020, one day after the crash low.

Whether the 3588 square-out high remains only a temporary hurdle will have a lot to do with this week's behavior.

Strategy. If the SPX breaks down below 3449 and follows through below 3353, there is a strong likelihood that the September 24 lows will be violated.

And violating and sustaining below the 3 Week Chart lows and the 20 week moving average struck on September 24 opens the door to the possibility of meaningfully lower prices.