The Worst Week Since March — Simple Profit Taking Or Something Bigger? – T3 Live

The Worst Week Since March — Simple Profit Taking Or Something Bigger?

“Trade in coming hours/days below Tuesday’s circled 3 Day Chart low will be a change in character and issue a Time Trend Turn sell signal.

This would coincide with breakage below the widely watched 50 day line.

Consequently, my expectation would be for accelerated momentum on trade below Tuesday’s low.”

I wrote the above in Thursday’s morning report.

We use the 3 Day Chart to determine the near term trend.

The behavior following a turndown in the 3 Day Chart (+ or – 1) does a good job telegraphing the market's intentions.

Every turndown of the 3 Day Chart in the SPX and NAZ since the March low has defined at least a short-term low and, in many cases, the start of a new leg up.

These dates in the SPX are:

The dates of the turn downs in the 3 Day Chart in the NAZ are:

The last one, 8/11, was a doozy of a signal for the growth glamours that reside in the NAZ as the index exploded 1100 points in 3 weeks.

Markets tend to play out in threes, in days, weeks and months.

The 3 week rally into September 2 capped a Climax Run that was defined by the largest range day of the run, leaving a Hanging Man bar.

The next day, September 3, the NAZ gapped down with authority and kept going in what I call a Fantasy Island sell signal.

It is not an Island Top because there is no OPEN gap before or after September 2.

In other words, the gap down on September 3 occurs within the body of September 2’s bar, but an Opening Range Break on September 3, in addition to the large range low close that day, underscored the idea that a Fantasy Island sell signal was on the table.

The signal was further validated by FOLLOW THROUGH the next day.

On Thursday, the SPX rallied out of the gate, fully testing its overhead 20 day moving average and, importantly, turning its Daily Swing Chart up in the process.

1) A Snapback to a declining 20 day moving average is what I call a Holy Grail sell setup just as a pullback to the 20 day line is a Holy Grail buy setup.

This is because of its effectiveness in defining buy and sell pivots.

2) If an item is in a fast decline, a one to two day turn up in the dailies will usually define a pivot high.

The market is in a fast break to the downside and on Thursday it turned up its dailies by the slimmest of margins on a full test of its 20 day moving average.

We posted the following on the Hit & Run private Twitter feed early Thursday.

Yesterday, following an Opening Range Break the SPX carved out a series of lower intraday lows and lower intraday highs. Once Wednesday’s lows were taken out, the market gave up the ghost.

This morning, the futures are bouncing pre-market, underpinning Mr. Market’s awareness of the significance of the aforesaid circled 3 Day Chart lows on the SPX and NAZ that both indexes were flirting with violating on yesterday’s close.

Both indices left large range outside down days on Thursday in front of the important Friday weekly closing basis staring a violation of their respective 3 Day Chart lows.

So it is not a big surprise that the wagons are being circled by the bulls overnight to protect against a Time Turn Trend sell signal on a weekly close below the SPX and NAZ 3 Day Chart lows.

(Whether or not they are aware of what a Time Turn Trend signal is… Mr. Market is).

The question is whether, like yesterday, this up opening rally is made for the selling or if it will stick for the day.

If a short-term oversold bounce should stick today, I think it is an opportunity to increase short positions going into next week prior to what I believe will be decisive breakage of the SPX and NAZ 3 Day Chart lows.

This will coincide, not so coincidentally, with both indexes losing their respective 50 day lines.

In sum, The NAZ has declined more than 8% directly off a record high in just 3 days.

What followed each were momentous declines.

This is one of the most extreme spreads in the last 30 years.

Does that mean we only take short-setups? No. Volatility produces two way opportunity for the agile trader with the proper tools and market timing.

For example, despite our bearish complexion, Hit & Run members have taken longs in NNOX, CYRX, OTRK and CRWD this week to mention a few.

We took a long swing in DKNG yesterday.

At Hit & Run, we embrace two-way volatility. While our Hit & Run methodology flourishes on navigating intraday and day to day volatility, at the same time the hallmark of Hit & Run is pinpointing entries for swing positions on both the long and short side in league with the Line of Least Resistance of strongly trending names on our Watch List. 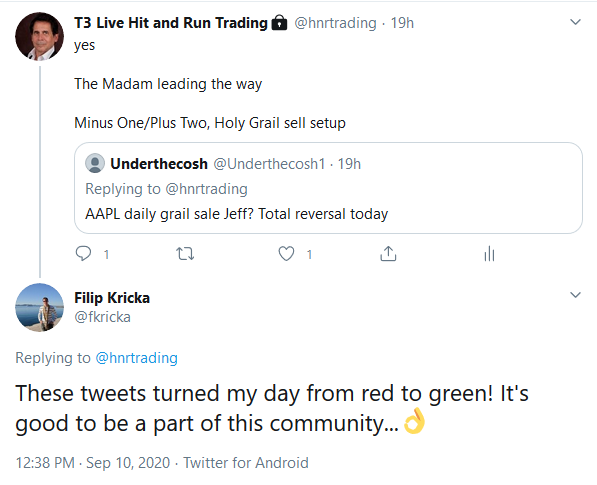 Previous Post Options In Play – Bearish Patterns I Look For Next Post Putting A Spin On PTON: What Does the Square of 9 Indicate?