“You had your time, you had the power.” – Radio Ga Ga, Queen

“Many people, not content with the forgetfulness provided by sleep… in one common wish implore from nature’s hand the nectar of oblivion.” – Samuel Jackson

Every bull run has its glamour stocks that serve as anthems for those long of stock.

These glamour stocks are spawned by stories that propagate a narrative of the speculative sentiment that underpins the bull.

In Greek mythology, Anthemoessa is said to have been the island home of the Sirens from where their plaintive songs drifted through the dark, hurling sailors to their death on concealed jagged rocks.

The doomed would subliminally understand the fatality of the draw toward the beautiful sounds, but would or could not care to resist.

As well, every bull market has an icon that spearheads speculative fascination and captures the imagination of players who ultimately get swept up in a frenzy where the stock price and the company and their products become indistinguishable.

Part of Steve Jobs' brilliance was that he recognized that cool sells. Sexy products sell at a premium. Jobs also went against the grain — when most retailers became obsessed with the internet, he started a brick and mortar operation.

Ultimately, the consumer is a social animal and crowded Apple stores offered a perfect viral arena for the sheer beauty of their products.

Going to an Apple store became a near-cult like experience.

Jobs recognized that service in these retail stores was the hallmark of success.

Yesterday, AAPL tapped into another trifecta.

Despite the pandemic, AAPL had blow-out earnings mostly based on China sales as I understand it.

AAPL shot up after hours just shy of 100% advance in a scant 19 weeks.

AAPL announced a 4 for 1 split.

After the close a friend and fellow trader texted me that his top indicator flashed red.

Being one of the best traders I know, this grabbed my attention.

The indicator… his mom.

She texted him asking if she should buy AAPL because of the split.

He laughed and said you had 10 years to buy it.

He went on. “My dad is the worst. Market would crash if he asked. I told him to buy on March 23. He told me market was going much lower. Two weeks ago, he asked if he should buy.”

Two weeks ago, in mid-July, the NAZ left a Key Reversal Day, a gap to an all-time new high with a close below the prior day's low.

A week later, that signal was tested with another gap to a new high and a reversal.

AAPL has carved out the same pattern.

This morning, AAPL will gap to another new high. Whether it repeats the gap reversals of the two prior instances this month remains to be seen.

In reality, it's not about the earnings. There is zero correlation between a stock’s performance and its earnings in any one-year period. Over the long haul, yes, but not in any given year.

It’s about being over-owned and under-owned — that quaint concept of supply and demand. That old familiar free market song is what drives stock price.

In reality, it’s about the supply and demand of sentiment, of emotion.

It’s about psychology. Everyone wants to be on the bandwagon when the banjo’s playing — including my friend's mom.

Mood is the money of the mid.

Of course, the true measure of supply and demand as a measure of price discovery has been warped at the hands of the Fed’s market machinations and corporate buybacks.

Did you know that stock buybacks were illegal until 1982?

Following the crash in 1929, the Securities Exchange Act of 1934 considered large-scale share repurchases a form of stock manipulation.

The last time AAPL split in 2014, they announced a $90BN stock buyback.

The great mistake that many investors make is to confuse a company with its stock.

They are two different things.

The AAPL story is reminiscent of RCA back in the Roaring Twenties.

It’s all about the supply and demand of emotions. When the music stops, the fundamentals cease to matter.

Mood is the mind of the market.

RCA bounced after the crash, closing the year at 44.

More than a 50% rally. The coast looked clear. 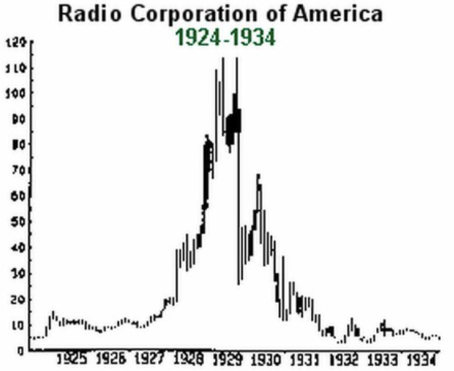 True believers kept buying all the way down, thinking it was cheap and looking for the prior strength to be revisited.

Stocks trade in phases. An accumulation phase, a growth phase, a distribution phase and a decline phase.

On all time frames.

When the prior strength fails to show up after a Climax Run, dashed expectations cause a new round of selling.

Until everyone who needed to sell has sold. Just the opposite of the way up when everyone who had to buy had bought.

Is there anyone left who just has to buy AAPL… other than the Passive, Systematic, Sedated Trade of the ETF’s?

Once RCA topped, it was a road to perdition for those buy and hold forever investors who smirked knowingly at parties that you can never pay too much for “Radio.”

Is there any price that is too much to be paid for AAPL?