Why Growth Stocks Are Getting Hit – T3 Live

Why Growth Stocks Are Getting Hit

A tsunami of selling hit the growth sector.

Aggressive selling in big winners like SHOP, ROKU was accompanied by buying in the cats and dogs, retail and cyclicals, keeping the averages themselves afloat.

Both SHOP and ROKU, the poster children for this year’s bull run, were showing subtle signs of distribution were terrific tells for the tsunami to hit growth.

The dislocation on the tape is stunning and in fact is the greatest momentum shift since the March ’09 low.

That shift sounded a blaring alarm for the turn of the decade.

Whether the crimson and clover on the current tape is a sign of a similar turn will be known in the fullness of time.

The action is exemplified by a daily SPYG.

A daily SPYG below shows Monday’s open set a new high for the rebound from early August. 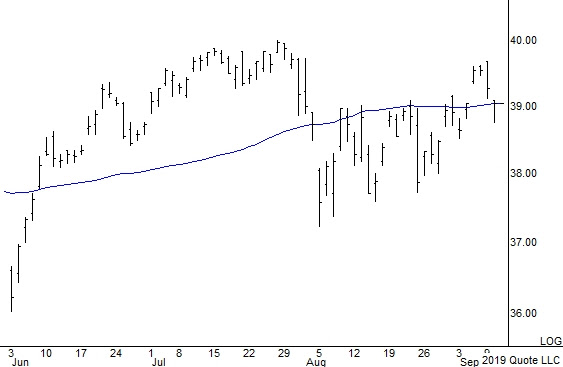 Monday’s large range outside down day was followed by breakage below the 50 day m.a. with a backtest of the 50 day line into the bell.

The entire pattern from the July 26 all-time high shows 3 drives to a test of the breakdown pivot within the context of a what looks like a Bear Flag.

This is what I call a Matterhorn Top pattern. It is a fractal of the weekly SPX from the March 2000 primary top to its late August 2000 secondary top.

Arguably, the SPX has traced out a similar weekly pattern over the last year.

From its September 2018 peak, there was a sharp drop followed by 3 drives to a test of the same region… albeit the subsequent drives struck nominal new highs.

When it comes to patterns in the markets, we’re in the realm of Picassos, not Rembrandt’s:

That said, it’s easy to see where the SPX could cave:

On Tuesday, the SPX turned up from a 21 point loss to close on flat into Tuesday’s open gap.

It was the 4th consecutive session the index closed in this same 2980 region, which we know is straight across and opposite July 26th, the all-time high.

So there is a possible time/price square-out on the table.

Tuesday’s low ties to a trifecta of short-term support. The rebound came from a logical level.

Be that as it may, it is stunning to see the averages hold (and IWM gain smartly) with the generals getting shot on the battlefield.

There is a trifecta of short-term support around 2950-80, below which should precipitate downside follow through:

Conclusion. There is a momentous shift afoot, not just in the winners versus cats and dogs, but in the bonds as well.

Bonds have been crushed right off parabolic and subscribers used the carnage to cover their TLT short and sell their September TLT puts.

At the same time gold has pulled back sharply from logical resistance as show in this space previously.

The precious metals may be setting up a buying opportunity with gold in the region just below 1500.

Strategy. The shift from over-owned, over-loved names to under-owned started in September, statistically the worst performing month of the year, when Mr. Market loves to scare the hell out of investors — and we have 3 weeks to go at a time when my cycle work suggests caution.

Whether this tectonic shift can occur without dislocation in the averages remains to be seen.

Right now the Fed’s dog and pony show along with the Trump Tweet Show seem to be working, but a continued sharp rise in rates could be the catalyst that pops the Passive Bubble in the SPY ETF.